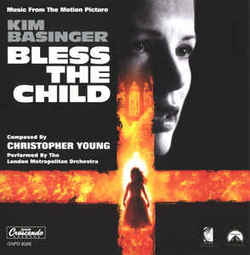 After scoring numerous horror films for the better part of his career, Christopher Young has finally scored his Omen. His score to Bless The Child is presented as an intricate requiem mass full of choir and orchestra, and is totally appropriate considering the film is probably going to be dead on arrival. Director Charles Russell (The Mask, Eraser) directs Bless The Child - a film about a satanic cult trying to find the "chosen" child (i.e. the antichrist) - who happens to be Maggie O'Connor's (Kim Basinger) niece. The plot was pretty predictable, but it was the acting by Basinger and co-star Jimmy Smits that was absolutely sub par. While Young's magnificent score held the film together, that's not enough to save it in the end. Thankfully the score album will be released, and I highly suggest you pick it on up.

As the album is presented as a requiem mass, the first track ("Introitus") sets the tone of the film - very dark, and very ominous. This is not a happy little score - this is as dark as Young gets, while staying "traditional" stylistically. There are no synth elements (that I could sense), and everything is done with the orchestra and choir to great effect. His use of a bass male choir (almost like the Tibetan throat singers) adds a significant creepy effect to the piece. "Kyrie Eleison" has a great segment about halfway into it that reminded me a bit of James Newton Howard's Restoration score - it's powerful, uplifting, and immediately followed by more dark horror music.

As would befit the title, "Dies Irae" (Day of Wrath) is a highly frenetic cue, with lots of pounding timpani and screaming brass. Later in the cue, the choir picks up again for some overdramatic moments. It's powerful to listen to on CD, but part of a cheesy moment in the film. "Angus Dei" is a more subdued quiet track, but still retains plenty of tension. The last track on the album ("Lux Aeterna") starts off nice an quiet, but quickly becomes more and more ominous as the low strings come into play - then all of a sudden there's a large orchestral flourish which segues into the choir which ends on a rather optimistic note.

I have no doubt in my mind that this is one of Young's best horror scores, and it is a testament to his ability to be able to go from The Hurricane to Bless The Child and deliver wonderful and different scores for both. However, Bless The Child should be so lucky to get half of the box-office that The Hurricane got. It's really not that good a film, even though I could sense that everyone involved wanted it to be enjoyable. GNP Crescendo is releasing the soundtrack to Bless The Child, and if you don't rush out and get this album, you might have to see the film as punishment.