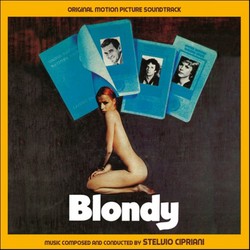 Quartet Records, in collaboration with Gruppo Sugar, present the CD premiere of erotically charged Stelvio Cipriani score for the French-Italian coproduction Blondy, starring Rod Taylor, Catherine Jourdan and Bibi Andersson, the film was released in the US under the misleading title Vortex which tried to rebrand the film as a science fiction thriller along the lines of The Andromeda Strain.

Stelvio Cipriani's score is a real delight, dedicated to the emotional aspects of the story as Catherine Jourdan embarks on a journey to infidelity. The heavenly siren-like voice is courtesy of Edda dell'Orso. On the other hand is given an international scope with excellent source music and exciting action cues highlighting the more action-packed half of the film. This is a close approximation of the classic '60s espionage sound with a definite '70s twist to it.

The soundtrack album was only released at his date in France on LP before; this CD premiere contains the identical original program. The 12-page full color booklet is richly illustrated, liner notes by Gergely Hubai discuss the film and the score.