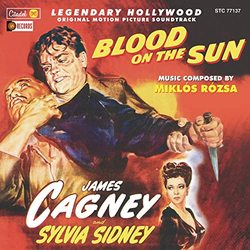 Blood on the Sun

Review: Blood on the Sun

I have to confess: of all the classic film composers, Miklos Rozsa is the one I\'m the least familiar with. It is in reviewing older "Golden Age" scores that I feel the least comfortable at voicing my opinions on the music - I just don\'t feel that informed. Every time I listen to one of Rosza\'s older pieces, I heard one of his last scores (Time After Time) in it. Or more specifically, I\'m hearing the older material in Time After Time.

I do know that Rozsa\'s style is endlessly fascinating to me. His ability to mix romanticism and folk melodies were one of his great strengths. His music is dynamic, driving but at the same time very focused and controlled. He wrote Blood on the Water during his busiest period, where it was common for him to write up to six scores a year.He work A Song to Remember, Lady on a Train, The Man on Half Moon Street, Lost Weekend and Spellbound (one of his best) all during this same year.

This Legendary Hollywood release from Citadel Records revives this very representative score of his from the 1945 film which featured James Cagney and Silvia Sidney. It is a noir melodrama set in 1920\'s Japan, which explains the main theme (heard in "Main Title", "Together Again", etc). The bold and sentimental romance theme shifts into an Asian sub-motif that then mixes the two styles boldly together and sets the tone for the whole score. The cues are big with strong violins ("Doubtful Moment" and "Dangerous Love"). Rozsa always built up suspense cues expertly ("The Perilous Block ", "Prelude To Death / Hara-Kiri") with dynamite action piece ("Tatsugi\'s Death and the Fight") that never wane in intensity. His ethnic pieces ("Japanese Tea Garden", "Tokyo Carnival") are not particularly authentic, but they are energetic. The score only takes up 30 minutes of the album but it is an exciting listen.

To fill out the rest of the running time, 9 tracks have been added to the album. Six are guitar covers of themes from Rosza scores (including From A Woman\'s Vengeance, Moonfleet, and Green Fire). They were arranged by Rosza himself and performed by Gregg Nestor. While all well performed, I was not particularly entranced. Epic themes do not resonate as much when they are minimized (though "Green Fire" sounds nice). Then there is a jazz ensemble cover of The Killers and Brute Force. This is more appropriate mixture as these films had small noir score suited to this kind of arrangement. Finishing out the album are a church organ and chorus cover from Ben Hur and King of Kings. I appreciate the overall attempt to give us something extra in the mix and I don\'t hold it at all against my rating.

You can hear a lot of recording hiss on the track, but that is inevitable on a score recorded over sixty years ago. Luckily it was Rozsa himself who preserved his own material years after the film\'s release so that we can hear them to. The later tracks are newer and thus cleaner. All together, a solid effort. So is this worth your time? It is classic Rozsa and that\'s all you need to know.