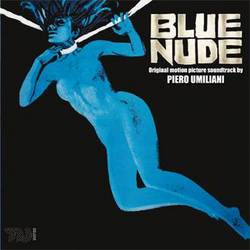 One of Piero Umiliani's lesser-known works, Blue Nude (1977) is a musically-rich effort that illustrates the artistic tension of the Maestro, always looking for new atmospheres and solutions. The cues recorded during these sessions really are hidden gems.

Innovator and anticipator as usual, the composer employed a modern, evocative jazz style that highlights a different lead instrument each time. Up to now, the only partial release of this music was on the album Due temi con variazioni, of which Umiliani produced about 300 copies with the label Sound Work Shop (SWS 119) in 1978. Not destined for commercial release, it featured a few cues and outtakes from sessions recorded during the Blue Nude period.

The jazz of Blue Nude shares the gritty backstreets of New York with some funk and country digressions, antithetical genres that the Maestro proficiently joins into the same concept. A sample of this unique contamination are the two cues "Blue Nude" and "Life Goes On," sung by the Rome-adopted New York vocalist Charles William Cannon.