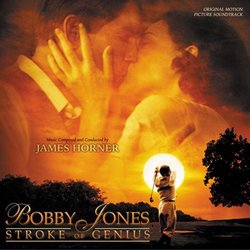 The biggest news to film score fans this year regarding composer James Horner was his well-documented replacement of Gabriel Yared on the film Troy. It is still hotly debated as to the appropriateness of the action and the quality of the music itself, but it can be agreed upon that the Troy debacle has overshadowed the efforts Horner made with Bobby Jones: Stroke Of Genius. The film stars former Messiah Jim Caveziel (The Passion of The Christ) and is based on the life of the 1920's golf legend Bobby Jones, who completed out his career at the young age of 28. Here, Horner treats the subject matter in a similar manner to that of his inspired score for Field of Dreams, namely that the events seem almost divinely pre-ordained and the sports icons themselves could be emissaries from Heaven.

This tone is covered well in the sublime track "St. Andrews", beginning with Horner's trademark pained, high-range strings answered by Irish penny whistle and ullian pipes, then followed a sonorous yet tempered brass and mid-range strings in a theme which might easily underscore pious activities or angels being glimpsed at work. This was my favorite section of this track, which then grows into a yearning, melancholy theme which Horner has perfected over the years. It is a track of quiet contemplation until the pace picks up a bit with Irish percussion and lively strings, brass and dulcimer, all again very pleasant. This activity is carried forth in the second track, "Baby Strokes", countered by French horn and the modal, pious chord progressions heard in "St. Andrews" by brass and low strings. And then, from out of nowhere on clarinet, a theme from Braveheart, barely altered, with the same bass counterpoint. Well, I guess Horner can only be expected to go so long before one of his old favorites pays a visit to one of his current works.

The reverent tone continues into "The First Lesson", along with the lighter fare utilizing the Irish whistle and dulcimer, playful yet still subdued, then in the final moments the music finally opens up in broad, soaring fashion. Another theme cut from the Braveheart cloth opens and dominates "Not Just A Game Anymore". The lively Irish theme begins "Destined For Greatness" on a winning note, leading into a noble brass chorale and the effective, modal theme and then into the yearning love theme heard in the first track. A more brooding, measured and melancholy tone is present in "The Painful Secret", while the Irish percussion brings a welcome, brisk pace and optimistic spirit to both "A Win, Finally!" and "He's On A Roll Now".

A subtle French horn solo starts "The Shot Of A Lifetime", augmented by the high-range strings, then leading into more variations on the dramatic side of this score. "Living The Dream" is the longest track on the album and begins hesitantly, almost as if it is itself afraid to disturb the golfer's concentration. The reverent tone is maintained and while still being enjoyable, it does begin to wear a bit thin at this point being that the listener might want to hear a resounding crescendo or two. The Braveheart theme shows up again, on whistle and bagpipes, of course, but the track did not build to satisfying finale as I had hoped. The "End Credits" reprises material from "Not Just A Game Anymore", which again is adapted from Braveheart, then there is reprise of the some of the rising, yearning closing sections of "Living The Dream", which is effective in its own right. Overall this is a pleasant yet undemanding score from Horner, still containing memorable melodic moments and showcasing Horner's gift for painting in certain harmonic colors. Perhaps the music is bit too insubstantial at times, too reverential for the subject matter, but the calm, assured, emotive quality nevertheless tugged at my heartstrings.