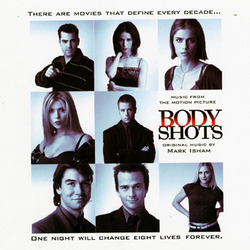 Body Shots is an American film written by David McKenna and directed by Michael Cristofer. Released in October 1999, Body Shots tells the story of eight singles whose night of drunken debauchery goes terribly wrong. The day after, Tara Reid's character says that she was raped. The score is composed by acclaimed composer, Mark Isham.

Here is a secret: Critics do not know everything. So, I found myself in the midst of research for this review. I already appreciate enough of Mark Isham's past work to realize this electronica, reprieved only by moments of 'live' instrumental virtuosity, is not part of his standard repertoire, so I went about attempting to fully understand the incomprehensible (to me, at least) draw of techno music. Out came the Propellerheads, Moby, and other discs of pulsating electronic noise. Amongst this morass, I realized Isham is one of the most unique and interesting of these individuals...

But that does not mean one has to like it.

The score is better than my initial reaction, which, quite frankly, was the thought of some poor synthesizers being beaten by a barrel full of monkeys. Actually, there are brief flashes of melody, several of the jingles worth hearing in a more eloquent setting. Isham plays his trumpet, strings peregrinate, curiosity peaks, and the score avoids undue predictability. These are the payoffs.

However, any student of drama will say that a few of the things most detrimental to art are ideas that change, but do not evolve. From Point A to Point B, Body Shots is theatrically barren and thus easily forgotten—already I must look at the cover to remind myself this album exists. Despite referring to filmusic as background scoring, the presence of 'unheard' music in film is generally only true from a sound standpoint, not a musical perspective. Whether consciously or subconsciously, one notices the music, so if the music is to do more than simply exist, and hopefully venture to add something important to the film, it must use its own inherent sense of drama, emotional pull, and technical aptness. Isham's score has neither drama nor emotion, and merely a line of musicality to set it above its kind. There is simply not enough substance to keep things going.