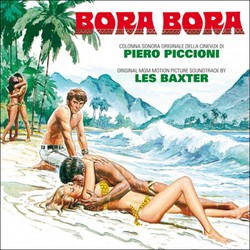 Telling the story of a young couple named Roberto and Marita, Bora Bora explores the differences between the technically advanced Western culture and the primitive native societies of Polynesia. Marita had left France behind to pursue exotic adventures, but her estranged husband Roberto follows her to get her back. Once on [Bora Bora, he also gets immersed in the culture of Polynesia, is inspired to liberate himself by the paintings of Gauguin and even makes love to a strange museum patron named Susanne.

Starring Corrado Pani, Haydée Politoff and Doris Kunstmann, Bora Bora was originally produced as a French-Italian co-production in 1968, which was picked up for American distribution by American International Pictures in 1970. The film was slightly re-edited, the actors were dubbed and the complete musical score was changed as a result.

The score for the Italian version was written by Piero Piccioni, who created a fun, easy-listening exotica score with memorable percussion work. The score was conducted by Bruno Nicolai features contributions by the choir of Alessandro Alessandroni.

The American score was written by AIP's in-house composer Les Baxter, who revisits his early exotica roots in this immensely memorable, nostalgic soundtrack that's as great of as concept album as it is a successful film score.

Both scores had been released already: Piccioni's music was put out on LP by Cinevox and a slightly expanded CD as well. Our program contains the complete material from the recording sessions with several alternates that didn't even made it to the film. Les Baxter's music was released on LP by the short-lived American International Records and hasn't been released on CD until now.

Actual LP masters with this re-recording versions have long since vanished, so this release is mastered from mint condition stereo copy of album. In addition to releasing the highly sought-after original soundtrack, we're proud to present the complete score from the film, courtesy of the MGM vaults, including several unreleased bits and pieces (the restored album is in stereo, the additional material is in mono).

The generous 16-page booklet is richly illustrated with titillating artwork and rare stills from the film. Liner notes by rejected score expert Gergely Hubai discuss the film, Piccioni's and Baxter's music, plus a detailed explanation on why score replacements like this were so prominent in the 1960s.