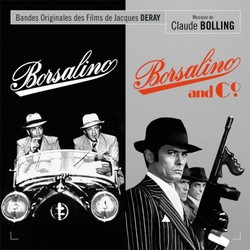 In collaboration with Paramount Pictures and Musiques & Solutions, Music Box Records proudly presents the remastered and expanded CD release of Claude Bolling's original motion picture scores to the 1970 French gangster film Borsalino and its 1974 sequel Borsalino and Co, starring Jean-Paul Belmondo and Alain Delon, and both directed by Jacques Deray.

Adapted from the novel The Bandits of Marseilles by Eugene Saccomano, Borsalino is based on real life gangsters who took over Marseille in the 1930s. The film laid the foundation for a lasting partnership between actor-producer Alain Delon, director Jacques Deray and composer Claude Bolling. The actor saw in it the opportunity to produce a spectacular big-budget film with a historical reconstruction, and also the chance to act opposite Jean-Paul Belmondo, who he considered to be the other star of the new generation of French cinema actors.

The score of Borsalino is built around an extensive use of the main theme, based from a honky-tonk piano theme that Bolling had written for a disc edition, which gives a nostalgic tone to the film. This well-known theme tune became an instant classic for Borsalino and its actor Delon. Bolling expressed his admiration for early jazz and provided a very stylish score with a retro flavour. For Borsalino and Co, like in the first one, in addition to a graver symphonic score, Bolling used waltzes and fox-trot pieces as background music for the sequences depicting Czardas's receptions.

Supervised and restored by Christophe Hénault, this present album features the expanded edition of Borsalino, carefully remastered from the complete recording sessions masters, including alternate versions and previously unreleased cues. In regard to Borsalino and Co, only the LP master was located, except the music from the opening credits and an unreleased song performed by Michčle Bach. The 12-page booklet features an essay by Gilles Loison discussing the films and the scores.