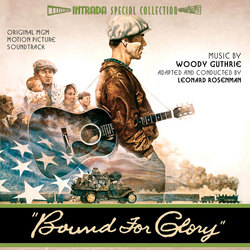 For Bound for Glory (1976), Leonard Rosenman performed three roles—adapter, composer, and arranger. At the heart of the film are Woody Guthrie's songs. David Carradine's performances of these songs throughout the film are every bit as heartfelt and passionate as the originals and Leonard Rosenman undertook the task of not only adapting the songs and coaching Carradine, but also working Guthrie's songs into the film's underscore.

Rosenman was especially proud of the 15 minutes or so of original music he had scored for full orchestra—powerful symphonic music not reliant on the folk idiom of the picture and music worthy of its own special attention. But not until now.

The prolific United Artists label issued a soundtrack in conjunction with the film's release in 1976. Not surprisingly, it focused on the Carradine vocals and a few of the adaptations, relegating the original score to brief excerpts sandwiched between other cues. As disparate as that may sound, however, the album was a magnificent recreation of songs from the legendary Guthrie, displaying his gifts for simple folk melodies and messages that spoke to the poor and downtrodden.

This important record had never been released on CD, and it is an important time to do so, especially since America is now celebrating this important folk artist's centennial with tours including new performances by his son Arlo and performances by several other important singers influenced by Guthrie's music. This CD premiere shares in that celebration, expanded to include all of Rosenman's original underscore.

Rosenman's own dramatic voice comes to the fore primarily in climactic moments such as the arrival of the dust storm, where he creates a "layered" effect with threatening orchestral gestures struggling against solo harmonica, and "Running For The Train."

Conversely, he enhances more intimate, emotional scenes with sensitive arrangements of Guthrie songs, such as the heartbreaking setting for guitar and strings of "So Long It's Been Good to Know Yuh" that plays as Woody says goodbye to his family and heads for California (reprised with even greater poignancy later in the film when Mary takes their kids and goes back to Texas), or the hushed setting of "Curly Headed Baby" that reflects Woody's love for Mary as he writes her a letter.