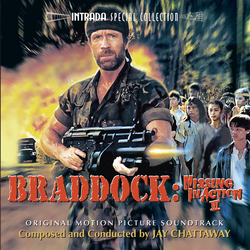 While songs by Ron Bloom are not available, Intrada presents complete Jay Chattaway score in stereo from 1/2" 30 i.p.s. four-track masters vaulted at MGM plus all stereo cues preserved from first film for use in this third movie as well. Jay Chattaway conducts. Intrada Special Collection CD limited to 1000 copies!