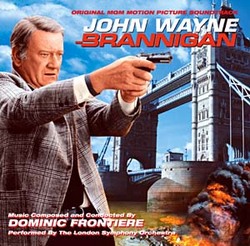 The decade of the 70's, in the post-Shaft and Superfly era, must have been difficult on some established film composers who were suddenly being asked to incorporate funk and R&B elements into their scores.  Some composers had a background in jazz and thus when John Williams scored Earthquake and Lalo Schifrin scored Enter The Dragon, they could access those chops to successfully integrate the grooves which were hip at the time.  Even good ol' Elmer Bernstein had McQ for his funk opus.   Now we have Dominic Frontiere's music for the second John Wayne 1975 urban detective picture, Branigan - a rare non-Western setting for the actor, and the composer succeeds in making a very enjoyable turn out of the situation.

The album starts with the pulsating "Main Title", where brass and saxophones belt out the main theme in a brash, confident fashion, followed by a mid-tempo funk presentation which is highlighted by a nice, lyrical string bridge.  This extremely catchy theme dots the score's landscape but is never leaned too heavily.  A reprise shows up in the next track, "Knock, Knock (Main Title Part Two)", following a bout of low-key suspense on brass, drums sax and bass guitar.

The suspense element is the main contrasting element to the memorable main theme.   Tracks such as "The Kidnap", "Ransom Part One" and "Shotgun" consist mainly of tense, worried textures, presented by swirling strings and woodwinds, muted trumpets, brass stingers and odd percussion.   These are certainly effective and much more listenable than contemporary suspense passages, but admittedly the album was heavier on this element than I thought it would be.  "Raindrops Keep Falling On My Bird" is quite engaging in that it contains a larger assortment of percussive instruments, such as castanets and what sound like devices Goldsmith used in his legendary Planet Of The Apes recording, all punctuated by jagged brass and low strings and a thick dose of rising tension.

The funk element makes a welcome, bold return in parts two and three of the "Ransom" tracks and "Stampede Along The Thames" where the pace is quick, the grooves thick and the brass positively swagger as the main theme is belted out like Shirley Bassey singing "Goldfinger".  A pleasant and relaxed variation occurs in "Twenty Five Grand", showing its versatility.  Trust me, this theme will not leave your head after being heard only once.  Without it, the score would seem a bit cold, harsh and non-melodic so it certainly saves the day much as Wayne's character must in the film itself.   In addition to the theme variations and suspense cues, there are two orchestral-only action tracks, "Bugging Around" and "Here Comes The Jag", full of panicked strings, staccato brass, pounding timpani and tam-tams and an overall rising intensity.   The album and score is rounded off by a reprise of the mellow bridge from the "Main Title", just so we don't forget from which decade this music originated.  All in all, an enjoyable album, though a bit long on the suspense tracks over the funk material.