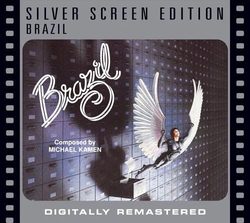 Performed by
The National Philharmonic Orchestra of London

In Brazil, Michael Kamen achieves what few composers in any medium have done: fuse a stunning variety of forms (ranging from symphonic to jazz to 30's pop), stuff them with allusions (everything from Maurice Ravel to Woody Woodpecker)—and make the final result as gloriously, giddily romantic as it is heartbreaking. With Brazil, Michael Kamen has created one of the greatest dreamscapes in music. Bonus Material: exclusive interview with Terry Gilliam, discussing Brazil's music, his role as the film's director and his perspective on film music today.