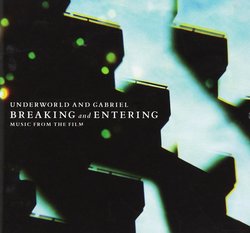 That Gabriel Yared - you always know what he is going to do. After his great unused work on Troy, I said to everyone, "He\'s gonna work with Underworld soon!" (I kid, of course.)  As Yared writes more and more, his skills become more and more subtly impressive, especially his work with writer/director Anthony Minghella. Each film in their collaboration ventures into a different musical territory, be it combining jazz and Bernard Herrmann (Talented Mr. Ripley) or bluegrass harmonies (Cold Mountain).

So as an idea, Yared collaborating wth Underworld sounds really promising.  Plenty of electronica stars have composed film music (UNKLE on "Sexy Beast", Massive Attack on "Unleashed", BT on various projects), but none have worked extensively with an Oscar-winning composer. So Underworld teamed up with Yared at Abbey Road to create a new sound. The movie is a moody introverted character drama of relationship confusion and alienation, sort of like a Milan Kundera novel. So as to be expected, there\'s plenty of dreamy background ambient tones accompanied piano, strings and a HANG (a Swiss percussion instrument) features prominently on several tracks. Street ambience and a soft haunting male voice (the three composers\') drone in an out of tracks.

It sounds smart for a concept album -  but for all of their collaboration, the final result sounds like more of a like a mix album between Cliff Martinez and Air. You can also make comparisons to Sigur Ros, which Minghella says was an inspiration as well.  One of Yared\'s great skills is his ability to merge the score into the context of the movie. It doesn\'t overcompensate and try to overpower the visuals. Here, Yared submerges himself completely into the electronica. Occasionally his jazz instincts come out ("Will And Amira") and the styles merge for interesting, quirky tracks ("We Love Bea", Happy Toast", "Happy Toast").

But when you look at the album as a whole, there isn\'t much of in terms of distinctive motifs. There are three instrumental signatures that occur through the album.  The strongest is the Will motif (Jude\'s character): a guitar, xylophone, piano, drum \'n bass piece that starts in "St Pancras" and re-occurs in "Monkey One" and "Mending Things." Then there\'s Miro\'s motif (in "Monkey Two") which is accented by strong percussive rhythms, and a series of atonal, melancholy tracks charting the sadness of the movie\'s multiple relationships ("Not Talking", "Primrose Hill ","Broken Entered"). Only in "Counterpoint Hang Pulse" do all of these motifs come together in strong opposition. This extended track shows that the music is better in overlap than with the previous series of individual tracks by themselves.

The awkward part is that none of it is poorly done (there\'s not a bad track here), and it works fine within the context of the movie. Maybe I\'m being prickly, but I was expecting something more unique from them. For the style, it is well done. But in the end it isn\'t distinctive enough to be more than a curiosity for most.