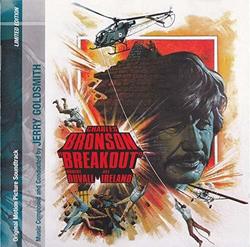 by Dan Goldwasser May 30, 1999
3 / 5 Stars
In 1975, Jerry Goldsmith wrote a score for a neat action film called Breakout. Starring Charles Bronson as a bush pilot who frees Robert Duvall from a seedy Mexican prison, the score to Breakout required Goldsmith to include many "South of the Border" instrumentations as well as traditional (for 1975, at least) action cues.

Beginning with a very cool rhythmic guitar picking which is slowly covered in layers by other instruments (including horns and strings), "Main Title" sets up the theme with which Goldsmith will populate this score. There are plenty of tense moments, with only soft string chords, percussion, and underlying guitar plucks. In track 5 ("Ambushed") we get to hear a abit of what Goldsmith was doing with action at the time - a lot of tense pounding orchestral work which builds to a climax which brought in those (now expected) Goldsmith string octaves playing the theme.

But amidst all the action and tense drama, there are some more relaxed, almost romantic cues. "Schemes" provides us with a very enjoyable string and piano piece whose theme reminds me somewhat of "The Piper Dreams" from The Omen. Once he brings in the flute, however, the similarities are staggering. But this is one of my favorite tracks, simply because of the highly enjoyable melody and the way it suddenly goes sour at the end.

The climax of the film is covered in two tracks: "Breakout - Part 1" and "Breakout - Part 2 / Here They Come!" Both tracks feature the tense percussive and dissonant work which Goldsmith utilized on The Planet of the Apes and later used in other films, most notably the Vic Morrow segment of Twilight Zone: The Movie. But the "Here They Come" cue also incorporates a large Mexican feel to it, with fast strumming guitars and flutes.

This album was released a special Limited Edition Club Release through Prometheus Records, out of Belgium - it is only available in the United States as an import, and only 2500 were manufactured. The sound quality is quite good for a 1975 recording, although there is a minimal amount of tape hiss. The orchestra itself sounds rather small, but that is probably because it was. This is no sweeping Goldsmith score, but it is one of the good ones he wrote in the mid-70's, and if you can get your hands on it, it would make a great addition to any soundtrack collection.