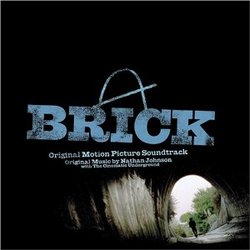 Performed by
Nathan Johnson with the Cinematic Underground

I wrote, not too long ago, that originality and passion are what I look for most in film scores these days. Nathan Johnson\'s score to the modern film noir Brick does not exactly hit you over the head with, well, a brick of passion the way a 90-piece choir can, but you can definitely put a big yellow "ORIGINALITY" sticker on the cover. If most of the score sounds like it was recorded in someone\'s kitchen with utensils and glasses, it\'s because it sort of was. The idea behind the score was to create a musical junkyard, an atmosphere of desolation and weirdness. The composer took a shopping cart to the local grocery store, a big grin on his face, no doubt, and started buying his instruments.

To call Brick a collection of whisk clicks and glass clacks would be a gross generalization. The kitchen utensils, filing cabinets, and radiators are complemented by guitars, Rhodes pianos, metallophones, lonely trumpets, contrabasses, violins, banjolins, a fluttery clarinet and, most distinctive of all, a wine-o-phone, an array of wine glasses tuned to recognizable Western pitches. This wine-o-phone becomes the calling card of the score and the backbone of Emily\'s Theme. While Brendan, a high school outsider played by Joseph Gordon-Levitt, investigates the mysterious death of his girlfriend, Emily, that theme serves as a reminder of the quest. It is a sad yet elegant theme and, the way it is played on the wine-o-phone, recalls the way one plays a mandolin. "Emily\'s Theme 2" brings a distorted Rhodes piano to replace the wine glasses, while "Emily\'s Theme 3" has the guitar and the violin taking turn with the hummable melody. At least two other strong themes make their way onto the soundtrack: an airy, slightly gypsy-sounding clarinet aria for Kara, the drama queen, and an urban blues-y Rhodes piece for Laura, the rich femme fatale.

When these melodies are not playing, the score is an interesting mix of film noir idioms, The Caveman\'s Valentine\'s percussive follies, and Jeff Beal\'s Carnivàle. It sounds distorted, a bit empty, minimal. What could have been boring is kept interesting by the composer\'s constant use of novel sounds and his grasp of mood and dissonance. The only element working against the album is its 71-minute running time which feels unnecessarily long. A tighter album clocking in at 35 minutes would have been, in my opinion, more effective, but that is an inconvenient which can be easily resolved by judicious programming on your CD player or computer.

For those who have not picked up on the clues along the way, let me phrase it more clearly: this is an experimental score. It was recorded with one microphone on a battered-up PowerBook using wine glasses, kitchen utensils, metallic appliances, and the occasional acoustic instrument. This is not Titanic; it is not The Lord of the Rings. This is a score that proudly stands on the fringe of what is called film music by most people. It will be hailed by its fans; it will be booed by the more conservative people among us. When all is said and done, however, how often are these polarizing scores composed and released? I say revel in Brick\'s insistent crave for originality before Hollywood hits us with yet another serving of reheated piano-and-strings crap.