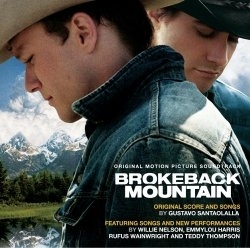 I have to be upfront and admit that I found it difficult to evaluate the score to Brokeback Mountain. On the one hand, here is an important film, a film that is sparking a national debate and will certainly be nominated for the Best Picture Oscar. It has been scored by Gustavo Santaolalla, the Argentinian composer whose music, since heard first in The Insider, has been garnering intense praise of its own. On the other hand, here is a CD release that consists of about fifteen minutes of underscore. The remaining thirty minutes are taken up by the songs that pepper the film. As someone interested in the traditional underscore, song scores bother me a bit. So if you'll bear with me, I want to look at the CD from two angles and see if I can't more fairly evaluate it in this manner.

As a director, Ang Lee has always been very conscious of the role music plays in his movies, and Brokeback Mountain is no exception. The movie's pace is deliberate, its passion muted, its language sparse. To complement that feel, and indeed to generate it, Lee turned to Santaolalla to write both songs and score. Brokeback Mountain is one of those rare instances where the film was shot to the music; Lee has said that every evening during filming, he listened to Santaolalla's music to make sure he was getting the right mood. This close cooperation between director and composer is unique and resulted in an intimate marriage onscreen.

It also resulted in a recording that is incredibly unified in texture, rhythm, and harmony. The best word to describe the experience of listening to it is elegiac. I often bemoan the fact that a score does not play well when released on CD, but in this case, the recording is a musical journey as rich and rewarded as the cinematic one. The songs and instrumental selections are in the old tradition of American country music. They tell of heartbreak and anguish and unrequited love. As a release, Brokeback Mountain stands as one of the best scores of the year.

As an underscore, however, it ranks as a mixed effort. The music is scored for guitars (both acoustic and slide) and string orchestra, and in each small cue these instruments are given great presence by the amount of reverberation put on their sound. This helps lend some weight to scant musical material. Santaolalla has devised a chordal progression that recurs in every cue; in effect he paints with the same colors every time. The resulting sound is unified and sets a mood, but could not stand up much past the two minutes afforded to each cue. There simply isn't enough material.

And now, perhaps, you understand why I have so much difficulty with this release. The CD is wonderful as a listening experience. The score plays an important role in creating the movie's atmosphere and works well in that situation. The cues themselves are scant, with little musical weight or interest. So, should you buy the CD? I would say buy it for the songs and the experience, but not for the instrumental score.