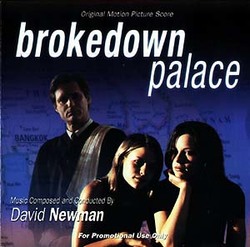 David Newman has always been a very versatile composer. From his dramatic orchestral score to Hoffa and his swashbuckling score to The Phantom to his funky jazz score to Bowfinger, Newman has proven his abilities to lend just the right score to whatever film he might be working on. With Brokedown Palace, Newman took the traditional dramatic approach, but with a few twists. There is quite an Asian flare to the score, and the appropriate ethnic instruments are used quite prevalently throughout. The additional use of a hip-hop rhythm track for some cues adds just a dash of surrealism, since it tended to be married to either the Asian instruments, or the full orchestra.

Brokedown Palace is about two tourists who find themselves accused of a crime, and dealing with a foreign country's laws. This allowed the presence of some tense music cues, including "Pool Boy Testifies", which starts off rather quietly, and then as the orchestra builds slowly, some off-tone tubular bells are heard. The hip-hop rhythm comes in with the main theme - but it's all anti-climactic, and the cue ends with a bit of dissonance. Most of the score presented on this album consists of the quieter moments, but because of a strong main theme, there is plenty of listening flow to the album.

One of the problems I had with the album is that it had too much flow - I didn't notice the tracks flying by, and before I knew it, the album was finished playing! It's not a short album - it runs about 40 minutes. But it played so naturally, that there were no notable breaks. This is a direct result of the tracks being rearranged so as not to be in the chronological order of the film.

Released as a promotional album, Brokedown Palace isn't going to be that easy to find. But if you're building up your David Newman collection, it's a promo CD well worth the effort in finding. Now if only we could get a promo release of his score to Anastasia - now that would be perfect!