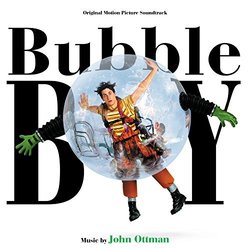 To elaborate on that, let me say that much of Bubble Boy reminds me of Ottman's earlier score to The Cable Guy.  Both are brimming with pop culture references (Bubble Boy's "Theme from Rocky," Cable Guy's "I Love Lucy Theme"); both have a playfulness that tends to come from a true excitement for the material.  The differences are that where The Cable Guy was a case of Ottman working with an orchestra that was entirely too large and an Elf-like shadow which loomed high, Bubble Boy is a composer who has matured greatly and found very creative ways to be original and inventive with very limited means.  To hell with Elmer Bernstein's mock-serious school of comedy scoring; Ottman's music is all-out silly, and in a way that is very much his own.

The synth mock-up in "Birth of Bubble Boy" gets the ball rolling right off.  Such a high-energy cue you rarely hear these days, even in the most high-energy of comedies.  John introduces us to a nice theme - again, not ground-breaking, but delightfully tuneful - that will certainly not make itself scarce for the rest of the album.  This cue - along with such gems as "Phreaks", "End of the Ride", and "Phreaks to the Rescue" - shows that if John decided to commit the rest of his career to comedy, the genre would be in very qualified hands.

The more tender moments of the score - notably, "Heartbroken" and "Reunion" - are also very much John's own.  His penchant for solo guitar is on display here in a way that is not at all out-of-place (as guitar with orchestra often can be).  Damon Intrabartolo's orchestration is creative and refreshing to a fault, and Deborah Lurie's contemporary arrangements are much appreciated on such bizarre and delightful cues as "The Clouds / Riding with Push Pop" and "Cows and Ice Cream!".

All in all, Bubble Boy is probably not going to make it onto a lot of top-10 lists, even in a year as dry as 2001.  Still, whether you take it or leave it, I think that it is a fine example of its genre, which is creative and delightful enough to warrant a listen on its own.