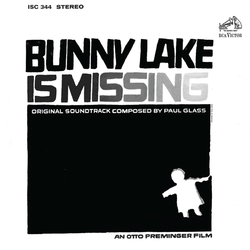 For the 1965 Otto Preminger film Bunny Lake is Missing, composer Paul Glass created a memorable and highly original symphonic score. Glass worked with general serialism and even strict 12-tone techniques for his more atonal sections, moving effortlessly between intense sequences and those with firm tonality. This is showcased best during the film's climactic sequence, the score's dramatic highlight, where Glass melds both aggressive, dissonant ideas and genuine tonality into a singularly unique and powerful experience lasting nearly six minutes. In the intense, powerful segments of the score, Glass spares nary a single instrument in the virtuoso activity. Virtually every player is called upon to contribute to the violence, be it muted trumpet or fortissimo trombone, jabbing clarinet or stratospheric piccolo, pounding snare drum or demented xylophone.

Intrada had access to the 1965 unedited album pre-master, allowing the label to retain the raw intensity and clarity of the actual performances as well as avoid the additional album reverb prevalent in many '60s soundtrack albums. These original two-channel stereo tapes were in excellent condition and also includes the vocals by The Zombies.