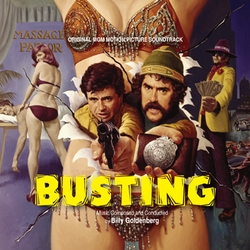 For the score to Busting, Director Peter Hyams chose a composer who was having a lot of success in television, and who had done a handful of films—Billy Goldenberg.

Goldenberg's score for Busting is one of his most interesting and unusual—it has some serious funk, some fun source music, some terrific suspense cues, and some very unorthodox (for the time) orchestrations. His music fits the film like a glove—it's just as sly, irreverent and off-the-cuff as the movie's sly, irreverent and off-the-cuff protagonists.

For this CD release, we present every cue that Goldenberg wrote for the film. Some of these are dialed so low in the film mix that you can't even hear them. We've assembled the cues in film order, but have consolidated a few of the shorter cues into longer ones for a better listening experience.

There were two source music cues that didn't have cue numbers that didn't seem to be used in the film (at least that you could hear)—we've included those as bonus tracks—one of them has some great funky organ that would have been perfectly at home in any number of blaxploitation films of that decade. The score was assembled from the mono tapes housed in the MGM vault.

There is not nearly enough Billy Goldenberg on CD—and so it is a particular treat to be able to do this wonderful score, and hopefully it will usher in more Goldenberg—he was (and is) a master of his craft and a unique talent.