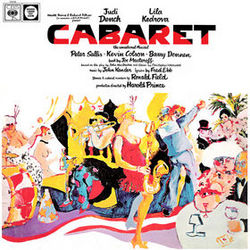 The London production of Cabaret marks a number of first occasions. It is a first musical both for award-winning actress Judi Dench, starring as Sally Bowles, and for Lila Kedrova, who gained the 1967 Evening Standard Best Actress Award for her performance in The Cherry Orchard, while American Barry Dennen makes his British debut in the sensational role of the Master of Ceremonies.

Based on the play by John van Druten and stories by Christopher Isherwood, Cabaret is a dazzling picture in musical terms of the Germany that turned to Nazism, the glittering show sequences contrasting with the fleeting exhilaration and subdued undertones of lives they in turn reflect, motivate and ultimately destroy.