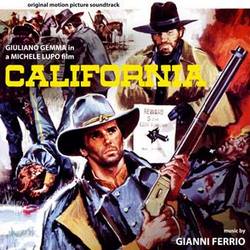 From California, only an EP single was released by Ariston, with the film's main score on side A. The master tapes from this OST were thought to have been completely lost until the mono master tapes were found in the private archives of Gianni Ferrio, which made this CD possible to create (63:10 minutes). Unfortunately the originals were not in good condition, and even after restoring them some tracks are still damaged. Nevertheless, this CD should be considered a miracle. Ferrio wrote a wistful main score with a male choir, orchestra and harmonica which alternates between Western themes and other more modern themes with a touch of rock. The score is brought up later in the commentary.

Another precious discovery from the private archives of Ferrio was the OST from Reverend's Colt. Also this OST was thought to have been lost forever, but it was found under the pseudonym "Lady Park". Thanks to a mono master tape, fans can enjoy the excellent music performed by Alessandro Alessandroni on guitar and whistle, accompanied by winds, horns and drums for the main score.