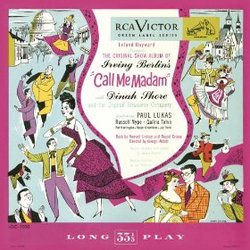 A red-hot ticket when it opened on October 12, 1950, at the Imperial Theatre, Call Me Madam—the madcap adventures of Mrs. Sally Adams, the U.S.'s new Ambassador to Lichtenburg—proved to be the blockbuster Ethel Merman and Irving Berlin hoped for. They were in the very best of hands: George Abbott directed, Jerome Robbins choreographed and the casting was supervised by Abbott's new young assistant, Harold Prince.

So—great cast recording for RCA Victor, right? A big problem loomed: Merman, at the zenith of her fame, was under contract to Decca Records. Decca simply refused to release her to star in what was sure to be a hit record for RCA Victor. Instead, the label sent her into their studio to record her songs from Berlin's score with Gordon Jenkins and His Orchestra, to be released on a 10" Decca LP. Eileen Wilson, the new star of TV's Your Hit Parade, and pop idol Dick Haymes were brought in to join her, to amp up the record's appeal.

RCA Victor turned to one of its hottest singers, Dinah Shore, to step into Merman's shoes for the original cast recording. Shore had remarkable qualities as a singer and personality—easygoing Southern charm, ladylike warmth, a fun and infectious sound that seemed "friendly"—that were almost the opposite of Merman's.

When RCA Victor announced their recording, Decca had Merman tape even more songs from the Call Me Madam score, to create a 12" LP that essentially has never been out of circulation. RCA Victor's recording, with Shore's gentle vocals and a narration spoken by Paul Lukas, sold reasonably well at first. It rose to No. 6 on the Billboard album chart but, by the late 1950s, it had been deleted from the catalogue. The recording got an LP reissue in 1977, in a collector's group of long-unavailable cast recordings, but it disappeared again until this Masterworks Broadway release—the first and only authorized CD version of RCA Victor's Call Me Madam digitally remastered from the original tapes.