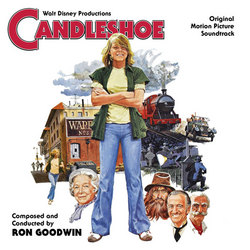 
Ron Goodwin infused his score for Candleshoe with three distinct flavors: family comedy, warm sentiment and rousing action. The first provides animated drive, the second offers emotional weight and the third sets off dazzling orchestral fireworks. The Devon native was an obvious choice for a film shot in England, about English people, and his comedy chops were fine-tuned having been put to use on a string of comedies in the 1960s. Goodwin's score features one of the most addictive main themes of any film, first introduced in the main titles, pumped out on trumpet and trombone in a syncopated meter over '70s funk rhythms, accompanying protagonist Casey and her motley orphan crew as they roam the streets of downtown L.A. wreaking havoc.

All of the music Ron Goodwin recorded in London during April 1977 is being presented in this premiere CD release, mastered in vibrant stereo from the 1/4" two track session mixes courtesy Walt Disney Pictures and the Ron Goodwin Estate.