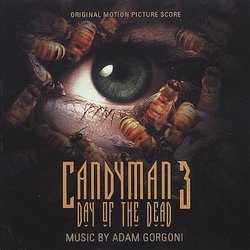 Candyman 3: Day of the Dead

Review: Candyman 3: Day of the Dead

Candyman was a great urban-legend horror film, with a wonderfully frightening atmosphere that just creeped me out.  Adding to that level of horror was Philip Glass's equally unnerving score.  Glass contributed music to the second film, but wasn't involved in the third film.  Instead, Candyman 3: Day of the Dead had original music by Adam Gorgoni.  The first film took place in Chicago, the second in New Orleans, and now this third film brings the hook-and-bees villain to Los Angeles.   Gorgoni's score starts out with an urban groove, and had me worried for a minute that it just be a hip-hop laden score.  However, I was pleasantly surprised when a tender and haunting piano melody came out of that groove.  That tender piano motif aside, though, the rest of the score is sadly unmemorable, and laden with a bunch of orchestra hits and tense horror scenarios.  A nice moment in "Are You OK" brings the score to another level momentarily, but the abundance of synth and atmosphere throughout the score outweigh the nicer moments, and make this album a tough one to recommend.