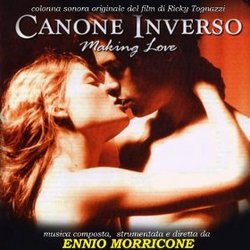 Based on the novel by Paolo Maurensig, Canone Inverso, much like The Red Violin, explores the mystery behind the previous owners of a special violin being sold at an auction.  Being an Italian production, the filmmakers wisely selected one of their own to score this film about music: Ennio Morricone.

Morricone has once again come up with a memorable theme for the film that is at once both passionate and full of melancholy.  Several variations of it appear throughout the score, including a couple with choral accompaniment.  That main theme, because it's so well done, clearly dominates the album and is sure to satiate the appetites of most Morricone fans.

Unfortunately, the remaining cues are generally 2 to3 minutes in length, which doesn't give Morricone enough room to develop any themes other than the main title.  Most of the cues seem like excerpts from classical pieces.  There's one action cue that even sounds very similar to one of his cues from Carpenter's The Thing.  Morricone is no stranger to composing great scores with short cues (The Mission, his Spaghetti Westerns).  However, in his previous work Morricone was always able to capture the heart of a scene in a couple of minutes yet establish a connective thread to the overall piece.  You don't get that sense here.  While listening to the album as a whole is not a bad experience, those looking for something with a little more meat will be disappointed.

In addition to Morricone's score there are 4 cues of classical music - all of which are violin solos.  Like the rest of cues on the album these are extremely short varying between 1-2 minutes each.  Without a doubt there is some great violin playing going on here.

Aside from the main theme, there isn't much that stands out in this score.  The rest of the cues, because of their brief nature and lack of cohesiveness, seem like filler.  Although some of these cues are performed in the film by the characters, they do not constitute a score.  This is recommended for die-hard Morricone fans only.