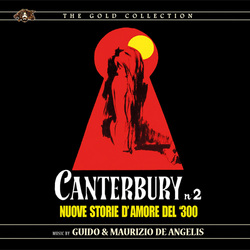 Kronos Records The Gold Collection is proud to present for the first time ever in any format the soundtrack of Canterbury n.2 - Nuove storie d'amore del '300.

The music was written by none the less than notorious duo (and brothers) Guido and Maurizio De Angelis. The music of this CD encompasses a wide yet very well glued musical spectrum. Each story narrated by the people of the Inn has its own score. There are medieval ballads, love songs and dark cryptic choral chants. The music on this disc will definitely not let you get stuck in a rut of monotony (quite the opposite) and at the end you will just wish it was longer.

Our sixteenth title in The Gold Collection is our first CD by the De Angelis brothers and the second CD for a film directed by Joe D'Amato and is a limited edition of 500 copies.