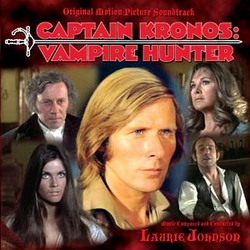 A little up-front warning: if you haven\'t seen the movie, the track listings reveal pretty much  the entire plot. I wouldn\'t want to do that to you because this is a great cult film to discover.  Sadly Captain Kronos: Vampire Hunter was the only feature by writer / director Brian Clemens, who was the primary writer on such influential TV shows as "The Avengers" and "The Professionals".  Having such success on TV, he set off to make his own genre-bending feature film. He wanted to invigorate the vampire movie by integrating elements of the western and the swashbuckler. The movie was to be the start of an on-going series but unfortunately it died at the box office. However, the quirky mix of horror, mystery and swashbuckling garnered the movie a cult reputation. Any movie with that title would definitely do that. Over the years its on-going influence can be seen in video games (Castlevania), anime(Vampire Hunter D) and film (the universally beloved Van Helsing).

"The Avengers" composer Laurie Johnson, who appropriately combined all of the various genres being mixed together, did the score. "Captain Kronos Main Title" is a galloping theme (set to the hero riding a horse through the countryside of course). The theme is heroic and foreboding, the B-verse contrasts with a melancholy oboe and strings. The theme works well in building tension ("Kronos Meets Doctor Marcus", "Vampire Hunters Start Work") as opposed to simply sounding triumphant.  In fact, even in the most triumphant moments of the score ("God\'s Blade"), there\'s sadness to the moment.

Johnson has always been a great and often underappreciated English composer who worked in many genres but always composed superior examples of those styles. Much of the score is indicative of Hammer horror movies with emphasis on strings for melody, percussion ("Tubular Bells") for uneasy musical passages and swirling strings for vertigo inducing moment ("Stalking the Prey"). You\'re very familiar with these elements by now and this album is a superior example of the style. Grand moments, like the mocking religious moment in "Evil in the Church" brilliantly manages to alternate between reverence and horror.

Included at end of the album are seven bonus tracks with various musical strings and theme reprises. The liner notes are especially good, offering a through retrospective in a minimum amount of space. While this release will go under many people\'s radars, it\'s been a long awaited requirement of genre lovers.