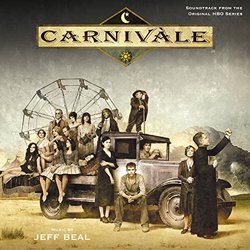 A positively addictive, depressingly beautiful minimalist piece is what I would call Jeff Beal's score to the HBO series Carnivŕle. The ambitious series is set in the Depression Era's Dust Bowl, a region in the South central United States that was affected with a terrible draught in the 1930s. It follows the mind-bending stories of a traveling carnival, the focus of an impending clash between good and evil as incarnated by Ben (Nick Stahl), a youngster with the God-like power to resurrect the dead, and Brother Justin (Clancy Brown), a dangerous evangelist exuding wits and charm yet hiding a potentially devastating secret. With the exception of the Main Title, the score was composed by Jeff Beal, perhaps better known for his lightly comedic work on the jazzy Monk.

Beal chose to restrict his orchestrations to typically small instruments that could have been carried on the Carnivŕle convoy. Hence, the backbone of the score is made up of a fiddle, a guitar, an accordion, a trumpet, a banjo and, occasionally, a solo cello. The strong acoustic foreground is often supplemented by a droning and evasive synthesized soundscape, to drive home the feeling of coming darkness and Depression-Era despair. The vast majority of cues on the album can be divided into two camps: those slow cues based around a fiddle or banjo motif, musical equivalents of a derelict convoy snail-pacing its way through sand-filled streets, and those more dissonant pieces, often accompanied by a brass buzzing, typically shaping Brother Justin's musical identity. The character of Ben Hawkins gets a theme which forms the basis of the "Carnivŕle End Title": this very simple fiddle lament is accompanied by a lower violin ostinato as its rhythmic counterpart. The theme comes back in "Ben Heals the Girl" and "You're the One", in the latter of which as a series of echoing and clashing piano chords. Brother Justin gets a theme of his own, fully fleshed out in the four-minute disturbing piece "Justin at Mr. Chin's". It's a theme that is heralded by a somewhat patriotic, apocalypse-proclaiming trumpet motif. A carnival-esque organ and flute cyclic motif is introduced in the same cue, eerily reminiscent of a more circus-y take on the classic Philip Glass sound, while an impending doom piece composed in the gypsy mode is taken up by the piano in both "Storm's Coming" and "Black Blizzard".

The best cues on the Varčse release are those that make strong use of Beal's underdeveloped themes ("Ben Heals the Girl", "Storm's Coming", "The Mark of the Beast") and those that offer a quaint, Southern-like innocence with prominent use of the fiddle and banjo ("Dora Mae's Funeral", "Fix Up Dora Mae"). Other cues stand out by their reliance on more vocal elements, such as a female vocalist in "Babylon" and the now-perennial TV classic sample of a boy's choir singing Agnus Dei in "Carnivŕle End Title (Ben's Theme". The remaining cues take us on a slow, dark dirge through troubled patches and samples, with the exception of the refreshing "Justin Calls Iris", featuring gypsy vocals and a rapid fiddle ostinato spun from the carnival-esque organ motif previously associated with Brother Justin.

Jeff Beal's television score to Carnivŕle is not for amateurs of pizzazz and in-your-face action themes; rather, it never quite builds to anything of substance, which might be seen by some as a failing. I believe it is an appropriate musical depiction of the Depression Era which bathes the characters of the show in its monochromatic sand light. The themes could have been more fleshed out on album and some of the musical ideas could have been spun upon and twisted around some more, but Beal's score remains solid at what it does. It is a dark and depressing, gypsy-inspired work of Southern sensibilities which will appeal to both fans of more restrained gothic Americana and those who fell in love with the classic story of good versus evil by way of bearded ladies and coin-vomiting madames.