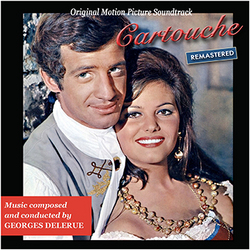 In the late 1980s, when the discography of Georges Delerue on CD was very limited, the Belgian label Prometheus courageously began operations by offering some unpublished works by Delerue, notably the complete soundtrack to Cartouche, a 1962 comedy drama directed by Philippe de Broca. A wise choice as it is a rich and colourful score, played by a large orchestra. Unfortunately, the sound quality of the disc was very disappointing.

About fifteen years later, in the early 2000s, Universal France reissued selections from Cartouche as part of its new film music collection. Excerpts would find their way into two compilations devoted to Georges Delerue, produced with the support of the composer's estate. However, the sound quality remained mediocre.

Disques Cinémusique has always been an ardent proponent of Delerue's music, especially of his early French period, so we have decided to reissue Cartouche in a restored version which attenuates significantly the imperfections of the recording. Our goal is both to make this outstanding soundtrack available again for those who have not yet acquired it, and to encourage collectors who already own the original to get our reissue, even though it doesn't offer new material. Indeed, the Prometheus release had all the music, including numerous compositions not used in the final cut of the film. Our only change to the program was to bring together, into a single track (06), two successive pieces that have a natural affinity. 8-page colour booklet. Limited edition of 500.