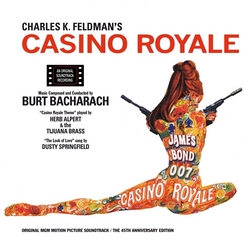 The film is a far cry from Ian Fleming's tense spy thriller—but it was never meant to be taken seriously... After the death of his boss, Sir James Bond (Niven) decides to battle its nefarious enemy SMERSH through confusing the heck out of them. By renaming all of its operatives to James Bond (including the girls), Sir James launches numerous parallel storylines with various characters dubbed as 007. Baccarat expert Evelyn Tremble (Sellers) is given the task to bankrupt the villainous Le Chiffre (Welles)—he is introduced to the world of espionage and love by the more experienced Vesper Lynd (Andress). In the meantime, Sir James' illegitimate daughter Mata Bond (Joanna Pettet) breaks off her sabbatical in an Indian temple to investigate a strange organization in East Berlin, discovering the most shocking auction ever. Another relative of Sir James named Jimmy (Allen) wrecks havoc as an incredibly incompetent agent, but he is ready to surprise his uncle when all the plotlines converge in Casino Royale for a huge brawl where cowboys, Indians, legionnaires and even monkeys participate in the largest slapstick scene ever filmed. The convoluted plot is the direct result of a nine month shooting period that ate up five (credited) directors, countless screenwriters and many changes in lead actors. The disagree-ments between co-stars Peter Sellers and Orson Welles lead to a major halt in production, then the entire plot was re-written and organized around David Niven's elderly secret agent, who'll have none of the modern shenanigans or gadgets at hand. The original adaptation was thus turned into an episodic adventure, where every single plotline is going in a different direction, then finally somehow ends up at Casino Royale (except the stories that go nowhere—those are just there for fun). Alternatively described as the "anti-auteur work of all time" and "a testament to wastefulness in the bigger-is-better cinema," Feldman's mammoth comedy stood the test of time and became a cult phenomenon referenced in everything from Austin Powers to Family Guy.

One of the most lasting aspects of the film is its score, provided by Burt Bacharach who had previously worked with Feldman on What's New Pussycat? (also release by Quartet Records the past year, and now sold out). His infectious main theme performed by Herb Alpert and the Tijuana Brass is just the starting point of an epic comedy ride that includes such highlights as the unforgettable "The Look of Love" by Dusty Springfield or the epic fight music at the end of the film. Produced by record industry legend Phil Ramone, the original soundtrack LP offered selected highlights of the program, expertly edited to showcase the best parts of the entire score. Thanks to the legendary sound quality of the stereo copies, this record became one of the most highly sought after collectibles of the entire industry. But Burt Bacharach's score deserves even more than that, so Quartet Records gave this decade-defining score a deluxe treatment to highlight all the versatility and humor the composer put into this immense spoof monument.

To commemorate the 45th anniversary of the film (as well as the 50th anniversary of the 007 franchise), we dug deep into various archives to unearth previously unavailable treasures and put together the definitive edition of the score. We found two diferent DME's in MGM's vaults and although the music stems were in mono, they were in very good condition except for the obligatory volume shifts in mixing. By carefully editing and remastering the tapes with top sound engineer José Luis Crespo (who frequently works together with Alberto Iglesias), we managed to create a program of the complete score in the better possible sound. In addition, we have created an convincent stereo image in Pro-tools, and mastering with the most advanced CEDAR tecnique. Every single note recorded by Bacharach for the film is here—we even removed some of the more glaring micro-edits to make Disc 1 of our collection not only complete, but aesthetically pleasing.

The Disc 2 holds our second surprise for fans of the soundtrack. Although the original stereo LP of Casino Royale is a highly sought after collector's item for its excellent sound quality, previous CD editions of the music didn't satisfy audiophiles because of the corrupted tapes that were used for those releases. There have been numerous attempts to ratify this mistake (including the Kritzerland issue the past year, and his effort to present this soundtrack from mint condition vinyl), we found something even better. We have been fortunate to find a 1/2 15 i.p.s stereo tape in the vaults of Sony Music Spain, which were used for the release of RCA Victor's Spanish release of the album in March 1968. Although this was not a first generation tape (which had been irrevocably damaged), it's a good alternative and with out subtle equalization to minimize the inherent flaws, this is possibly as good as Casino Royale is going to sound in the digital domain.

The coincidental discovery of these two treasures within 2 months prompted us to put together this exclusive package, which includes a double-CD, an 8-page full color booklet and a separate 64-page full color book with notes by Bond music specialist Gergely Hubai. The author discusses production history, analyzes the music, provides track-by-track rundown, compares the two programs and discusses the release history in addition to the eye-popping and shagadelic illustration that includes rare stills, poster artwork and other cinematic paraphernalia.