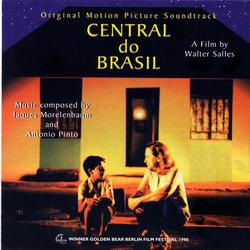 Most American audiences will most likely miss one of the better films of 1998. This small foreign film is Central Station, the touching story about a middle-aged woman who takes a small boy under her wing in an effort to search for the boy's father. One of the things that stood out from the film (aside from the award-winning acting talent of Fernanda Montenegro, who was brilliant) was the film's score composed by Jaques Morelenbaum and Antonio Pinto.

It is unclear as to what level their collaboration existed, but the fruits of their labor is a memorable score which in its simplicity goes to the root of the emotions of the film. The main theme is a simple piano-based one, which is featured in "Central do Brasil", and features a montage of images of the train station. Another major theme in the film is a nice orchestral movement reminiscent at times of Rimsky-Korsakov's "Scheherezade". Much of the score consists of orchestral underscore primarily based on piano and strings - there are no woodwinds or horns in this score. The resulting sound is an older, more classical feel that that which would have been achieved had flutes and horns been used. This older sounds is perfect, since much of the scenery in the film takes place in lower-class neighborhoods and areas in Brazil.

It is really hard to appreciate this score without seeing the film. A truly touching story about growth and relationships, Central Station shows us how circumstances can change people for the better - even if it's not in their best interests. This film is a strict dramatic character film, and because the story is so crucial to the film, the score needed to be just right. Morelenbaum and Pinto did an exceptional job adding the necessary emotional layer to some scenes which, if left unscored or scored improperly, would have ruined not only the flow of the film, but the necessary emotions would never have reached fruition.

The score to Central Station is available on Milan Records in the United States, and on Indie Records in Brazil.