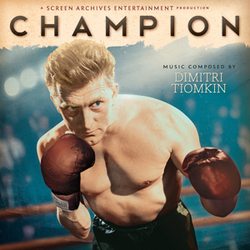 Two brothers, played by Kirk Douglas and Arthur Kennedy, who when we first meet them are bumming their way across the country to take possession of a diner that was sold to them bogusly. To earn some eating money, Kirk had gone the distance in a four round preliminary fight and came to the attention of fight manager Paul Stewart. Now dead broke, Douglas turns to Stewart who takes him on as a prize fighter, for real.

Douglas can't forget those days in the hobo jungle and is willing to do anything, use anybody to rise to the top of his profession. His role is a complex one, he's ruthless and tough, but he also has enough charm to fool the three women who enter his life, Ruth Roman, Marilyn Maxwell, and Lola Albright.

Nominated for seven Academy Awards including Douglas and Arthur Kennedy in the Supporting Actor category as Douglas's brother and conscience. Paul Stewart is every inch the wise professional fight manager who steps out of his league when Douglas gets into the big money in the fight game.

Moviegoer's who have ever seen Champion will never forget the primeval look on Kirk Douglas's face in the climatic fight scene in defense of his championship as he gets back up from the last of several knockdowns. Produced by Stanley Kramer in 1949.