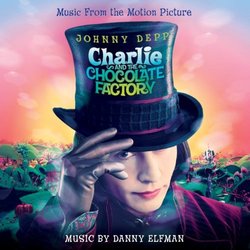 Charlie and the Chocolate Factory

Review: Charlie and the Chocolate Factory

About a year ago, when Danny Elfman attended a BMI-sponsored "Coffee Talk" event at the Los Angeles Film Festival, he gave a little insight into his current project: Charlie and the Chocolate Factory. Even knowing that this was not a remake of the beloved Gene Wilder Willy Wonka and the Chocolate Factory, but rather a new adaptation of the classic Roald Dahl novel, Elfman said that it wouldn't make a difference: "Tim [Burton] and I will be crucified." But now, having seen the film and heard the soundtrack, I cannot really say that I would agree with that sentiment, and Elfman was just being cautious, with good reason. The score that he wrote for the film is a fantastical return to the Edward Scissorhands style of film scoring, mixed with a touch of his current "modern" sound, and a dash of To Die For. The songs (and yes, dear reader, there are five of them), range through a variety of styles - but all retain that vintage Oingo Boingo edge that made Elfman such a success in the first place. Will it work for everyone? Certainly not - on first listen, the songs are disturbingly weird, and even a bit off-putting. But when heard in the context of the film, and the lyrics (which were adapted from Dahl's poems, with the exceptions of "Wonka's Welcome Song"), the songs suddenly work - exceptionally well.

The album opens with the aforementioned "Wonka's Welcome Song", an earworm-children's jingle that actually appears in the film as performed by an automated puppet show, which subsequently breaks down and catches on fire. It's supposed to be annoying - that's the point of it, and if you didn't know that in context, you'd just think this song was a horrible way to start the album. The four Oompa Loompa songs follow, and each one is performed by Elfman singing all the parts. On screen, the Oompa Loompas (all played by Deep Roy) stage exorbitantly choreographed sequences, set to each song. For "Augustus Gloop", the first time we see the Oompa Loompas in action, there is a large synchronized swimming sequence which fits the tribal rhythms and big-band music present in the song. "Violet Beauregarde" is done in the style of a 1990s Backstreet Boys pseudo-rap, and "Veruca Salt" is like a late 1960s rock song, replete with sitar and harmonized chorus. "Mike Teavee" has the variety of them all, which takes place as the shrunken Mike Teavee is bounced between different channels (much like Joe Dante's Twilight Zone: The Movie segment). Starting with hard rock (almost like Queen's "Bohemian Rhapsody"), it also has a nice Elfman edge found in older Oingo Boingo songs like "Insanity", then as the channel switches to a Beatles knock-off, the music switches styles yet again. In the end, the songs are all dark, and will probably grow on you as they go. However, if you're unprepared for them, or don't like Oingo Boingo all that much, you'll probably want to skip them.

The remainder of the album is score, starting with the "Main Titles", which introduces us to the motives and themes heard in the film. This track plays over an animated sequence of the chocolate bars being created and five Golden Tickets are placed in. It's got a steady rhythm to it that keeps the machines going, as the orchestra builds with the choir giving us little bursts. If you can't hear the main theme here, then you're probably unable to hear the themes in the Spider-Man films. "The Indian Palace" starts out as a source cue for a flashback sequence, but an emotional theme for Wonka is established towards the end, which will play a larger role later in the film. "Wheels in Motion" builds as the announcement of the contest sweeps the town, and then takes on different cultural bursts of energy as children mob the stores for the chocolate bars in different corners of the globe.

A softer cue, "Charlie's Birthday Bar" helps to establish the Family Theme which is heard again in "Charlie Declines". "Chocolate Explorers" is a calm track, with a sense of mystery that builds slowly, bringing in a bit of tribal rhythms and buzzing near the end. But it's "Loompa Land", during which a flashback shows how Willy Wonka found the Oompa Loompas, where Elfmanb brings the tribal beats (replete with chanting) up to their full levels. That carries over to "The Boat Arrives", a dark and dramatic cue, with a sense of grandeur tossed on top of the beats. "The River Cruise" is more of that, but at a steady pace, and it gets interesting later on the album in the second half, "The River Cruise - Part 2" where the chanting takes on a more urgent edge. "First Candy" covers a flashback to Wonka's childhood, when he first got his taste of candy. It builds to a sweetly emotional eruption of strings and chorus, reprising the emotional theme heard back in "The Indian Palace". "Up and Out" is a cue that builds to a frantic climax as the great glass elevator bursts through the top of the factory. Towards the second half of the cue, as Wonka meets Charlie's family, the music is more complacent.

The Family Theme and Wonka's emotional theme come together in "Finale", a tender cue sounding almost like Edward Scissorhands that wraps up the film on a pleasing concluding note. The "End Credit Suite" is comprised of music-only versions of the five songs, and ends the album on a bouncy note - assuming that you liked the songs to begin with. If you didn't, you'd probably skip this one too.

The album runs about 54-minutes long, and if you skip the songs, you'll only have 37-minutes to listen to. For me, this is an Elfman score that I'd be happy to come back and revisit; I realized that Big Fish and Spider-Man 2 didn't have the repeatability as Charlie does. With dark and catchy songs and a thematic score that has some emotion to it, this one's a winner in my book.