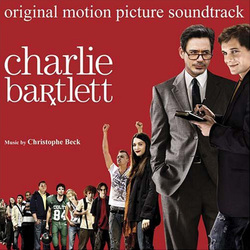 Rock and jazz collide in Lakeshore Records\' soundtrack release of Charlie Bartlett, a fun concoction of brisk score cues, catchy bubblegum anthems, and a few snippets of dialogue to even things out. The most unfortunate element of the soundtrack turns out to be its marketing campaign: the CD was released a week before the movie\'s supposed nationwide premiere, but said premiere was pushed forward six months into the future, leaving this soundtrack to fend for itself. In a sea of recognizable names, this soundtrack—which mainly features the more obscure monikers of Christophe Beck and Spiral Beach—might not easily fall into the hands of the consumer, but anyone looking for a light and catchy musical amalgam will not be disappointed by this one.

Soundtrack albums used to be plagued by the inclusion of dialogue; Charlie Bartlett pulls it off by actually serving us an unexpected and priceless gem in its opening track, "Charlie\'s Monologue". In it, smart and confident high-schooler Charlie Bartlett auditions for a play by reciting the most awkward and side-splitting monologue I\'ve heard in a while (and, no, it\'s definitely not Shakespeare). As the nervous laughter trails off, "Charlie\'s Theme" rolls in to the sound of hand claps, contrabass, and light jazz percussion. Christophe Beck delivers an intentionally awkward melody for the piano split in two phrases: the first one sounds hesitant, while the second gently steps down until it hits a dissonant chord and dissipates. This twinkle-toe\'d melody comes back again and again, the jazzy improvisations dancing around its structure, such as in the nimble "Tennis" backed by timpanis and the fast piano solo of "Jazz It Up". This light, jazzy characterization of Charlie\'s approachability is counter-balanced by the rock elements: "Kip Overdoses" uses distorted electric guitars and a drum kit, while "You\'re Not Alone" presents a more uplifting rocker\'s anthem that might find its inspiration in Robert Downey Jr.\'s character.

The songs, salt-and-peppered across the score tracks, break from that mold and explore catchy riffs of a different nature, creating a second facet that might be even more memorable than the first. It all starts with the powerful driving beat of UK\'s Hard-Fi, followed by the cool rhythm of Curtis Mayfield\'s "Pusherman" straight off the Superfly soundtrack, and ending with the crowd-rousing "Oh Yeah" by The Subways. The middle stretch of songs is contributed by the Canadian indie rock band Spiral Beach whose catchy songs pop in the air like gum bubbles. Their offerings are delightfully off-kilter while also being very memorable, and the combination of their vocal styling and infectious rhythms reminded me of the type of music featured on Grey\'s Anatomy. The last two songs on the album are of a different nature: they are earnest and purely acoustic. Tom Freund\'s "Seat On This Train" and Kat Denning\'s "If You Want to Sing Out, Sing Out" are the music of reconciliations and closing montages. They are in no way bad songs, but they do pale in comparison to the eclecticism that preceded them.

Charlie Bartlett is not pretentious; as an album, it is a fun listening experience, diverse and sustainable. Its charisma is woven throughout, being passed from one song to the next through Chris Beck\'s stylish cues. Charlie Bartlett offers jazz, hard rock, bubblegum pop, and acoustic ruminations in equal measures. Like its title character, it is cleverer than most and a step or two down the path of weird, enough to charm.