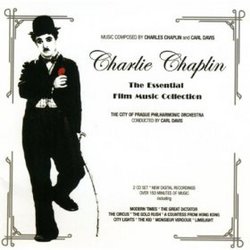 Charlie Chaplin is one of the greatest and earliest of auteurs in the film industry. Although he began his career on the vaudeville stage, he came to the United States in 1912 and by the decade\'s end, he was commanding fees of $1 million and building his own studio and distribution company. If any one man can ever be considered the author of an individual film, Chaplin certainly can. He wrote, directed, produced, and starred in almost all of his films. His body of work is a remarkable achievement by any stretch of the imagination.

What surprises most people with only a passing knowledge of Chaplin is that on top of all those accomplishments, he also wrote the scores to his most famous films, from The Kid to City Lights to Modern Times to The Great Dictator and even to The Gold Rush. And he did all this without ever having formal training in music (or even informal – he never learned to read music). After a series of single score releases of Chaplin\'s music, Silva has released this masterful two-disc set containing the most memorable moments.

When you listen to the disc one of this recording, the first thing you\'ll notice is where Chaplin\'s musical language originated. Chaplin was reared in the music halls of London and his music reflects that origin. It is over-the-top, based on popular music, and never subtle. Every moment on screen is telegraphed explicitly in the score through musical gestures that have become cliche. On the one hand, this approach is expected; Chaplin\'s films were mostly silent, so the music spoke where the words could not. But still, the music is often manipulative in the worst way and without the glory of Chaplin\'s physicality to snare your attention, the defects of this music are all too evident. This is not to say that the music is bad; it really isn\'t. The problem is that it is mediocre. It is light and diverting, but not very unified or complex. The one exception is the gem of a score for Modern Times. Modern Times was the last outing of Chaplin\'s beloved Little Tramp character and just as the movie remains one of his absolute best, the score stands above the others he composed. In it, you can hear Chaplin experimenting with orchestral tone colors, bouncing the main theme back and forth among instruments in as playful a manner as the Tramp bounces around the factory where he works. Chaplin even incorporates industrial sounds into the score, certainly one of the first times that happened in a film score. Unfortunately, on this release Modern Times takes up a scant four minutes. Not nearly long enough.

Spearheading this release was the conductor/composer Carl Davis. Davis is probably best known for his incessantly catchy music for the BBC production of Pride and Prejudice and his adaptation of Gilbert and Sullivan for Topsy-Turvy, but he is also well-respected for his conducting of film scores throughout England. It was this reputation that probably brought him to write Chaplin\'s "Mutuals," a collection of music for twelve of Chaplin\'s short films that is collected on disc two of this release.

Davis\'s "Mutuals" are the real find of this score. As he proved with Topsy-Turvy, he is a master at working within another composer\'s style, and with these twelve cues he has truly captured Chaplin\'s style. Unfortunately, that ability also proves to be the downside to these cues; while I would love to praise them uninhibitedly, I have to recommend them with a caveat. Davis has mastered Chaplin\'s style, cliches and lack of unity and all. They are as diverting and light as Chaplin\'s music, with a bit more polish and interested. Just try and listen to the parlor piano that opens "Easy Street" (the best cue on the album) or the weeping violin of "TheVagabond" and not smile and nod in recognition.

So, musically, an interesting release by Silva Screen. If you enjoy silent film-age music, this score will be a treasure. If you\'ve never encountered Chaplin\'s music, it is worth a listen. Carl Davis\'s contribution certainly makes an impression. But overall, I can\'t see this score getting repeated listenings. What I haven\'t told you, however, is that the liner notes to this release are outstanding and worth their weight in gold by themself, even if you have to pan for it yourself alongside the Tramp.