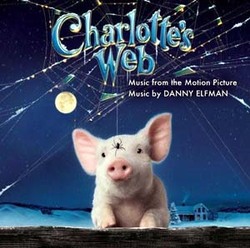 It\'s time for a little bit of nostalgia. I don\'t recall when my parents first read Charlotte\'s Web to me, but I do remember Garth Williams\'s drawings enchanting me before I could read on my own. As a child, the simple story of a spider and "some pig" drew me completely into its world, and I unconsciously absorbed the strong lessons and morals I see revisiting it now that I am grown. The book\'s ability to appeal in that way to all ages is part of its strength and part of the reason it has lasted. Charlotte\'s Web is one of those rare children\'s books that grows with you into adulthood.

I know from speaking with friends that my reactions to hearing about the movie version were shared – they\'d better not mess it up. And though I admire Danny Elfman\'s film work, I wasn\'t sure if he was the composer to paint this story. I had visions of macabre melodies dancing in my head. It was a foolish fear; I should have gone back and simply revisited his Black Beauty score. In that score, Elfman proved he is a master of composing a children\'s movie without resorting to saccharine, the exact approach Charlotte’s Web needed.

To prove this point, you need only to listen to the short cue "Farewell Charlotte." At the death of a beloved character, many composers would chose to swell the orchestra, bringing in all the Romantic excess that has seen many film characters to their graves. But that approach betrays the essential spirit of the movie and Charlotte herself. Instead, listen to the restraint with which Elfman writes. He takes Charlotte\'s Theme, which entered the score in a lilting arrangement for flute, harp, celesta, and strings in, appropriately, "Introducing Charlotte," and transforms it into something tender, but not melancholy. The same instruments are present, but pitched down for a darker cast, and instead of using them all at once, he pairs them for a more transparent texture. It is a pitch perfect cue.

Most of the album consists of cues illustrating the words that Charlotte spins into her webs above Wilbur. "Some Pig" finds the Elfman style familiar from Sommersby and Big Fish, that folksy, percussion and guitar and fiddle style that seems as though you are driving through the Appalachian mountains on a hot summer day. It is one of the few cues you feel Elfman really cutting loose. "Radiant" is a charming cue with piano and harp and woodwinds that flows by in a dance tempo until Charlotte\'s theme peeks through at the end. "Humble" is the longest and most introspective of the four cues; it moves through four distinct moods before ironically ending on the most bombast of almost any cue. "Terrific" returns to the sound of "Some Pig" with woodwinds sitting in for the fiddle and provides needed contrast to this section.

My brother has often remarked that there is no occasion that cannot be made sadder without a song by Ms. Sarah McLachlan. In many ways I think he is right, as her plaintive voice tends to add a poignant air over anything she sings; just think of her beautiful rendition of Randy Newman\'s "When She Loved Me" from Toy Story 2. Her Glen Ballard and Dave Stewart written track "Ordinary Miracle" casts a spell similar to "When She Loved Me" in Charlotte\'s Web. It is a lovely song, but featherweight and you\'ll likely forget soon after hearing it.

In Charlotte\'s Web, Danny Elfman has created a score that perfectly fits the spirit of the source material. Is it one of his best scores? Musically, no, as it lacks much of the inventiveness he is known for. But it shows again that he is a master of capturing a movie\'s tone and effectively aiding the drama without overwhelming it, a skill that keeps him in the forefront of film composers.