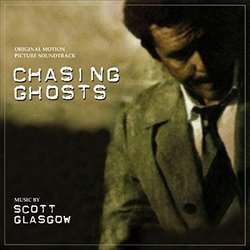 A composer\'s formative years can have a tremendous impact on the emerging artist\'s style and musical signature. Both Elliot Goldenthal and Scott Glasgow studied under John Corigliano and their styles are close cousins, especially when one compares Glasgow\'s recent Chasing Ghosts with Goldenthal staples such as In Dreams and Titus. Both styles are rooted in the minor mode with a pervasive dissonance among the orchestral lines; both make use of aggressively urgent violin runs and low, belligerent brass calls; and both show a penchant for Classical idioms and forms.

The movie, Chasing Ghosts, may not be reaping in any awards for originality, but its score is a different beast. Its style could be classified as "Classical Industrialism": it is cerebral, cold, detached, and inventive, highly percussive and urban, with a driving Classical elegance behind it. Glasgow\'s achievement is not only in crafting little details in cues that could be mundane in other hands, but also in making full use of the soundscape. Indeed, he manages to combine instruments and electronic textures in such a way as to fill any hole in the soundscape, utilizing high, medium, and low pitches, full pan, multiple depths, and both sustained and punctual sounds. This results in a full sound where no instrument steps on any other instrument\'s toes.

Glasgow employs many themes to better frame his work, only a few of which are apparent on first listen. The character of Taylor possesses a piano melody heard in "Parents", "Taylor Meets Davies", and many others. It is marked by grief and is pretty effective; likewise, a hesitant ascending theme can be found in "Handstamp Murder" and "Autopsy", recalling Howard Shore\'s hint of Aragorn\'s Theme in the cue "Amon Hen" from The Fellowship of the Ring. The most striking and emotional theme is clearly inspired by Goldenthal\'s "Finale" from Titus: it is a complex interweaving of string lines that is given form in "Interrogation for Violin and Orchestra" and is majestically and tragically fleshed out in "Karis", the last cue on the album and a highlight of the score as a whole. Other highlights include "Crossing the Bridge", another echo of Goldenthal\'s string-driven stylistics with woodblocks striking the meter over a rapid Classical string figure, and "Taylor\'s Apt", an understated rendition of Taylor\'s Theme on glockenspiel with accompanying woodwind and violins.

The cleverness of the writing and the mastery of film composition on display here should earn the score a solid four stars; its cold detachment and cerebral nature, however, affect its listenability as a stand-alone album. This is not a score that can be listened to in the background; it requires constant attention and a craving for musical details. It can be appreciated but it is difficult to get emotionally involved with its percussive accents, shifting textures, and staccato string lines. In the final analysis, it is a solid testament of a composer who shows great control over both the writing and mixing aspects of a film score. Glasgow is another young composer to watch out for; perhaps a future project will allow him to tap into a more emotional vein and distance himself from the world of obsessed cops and serial killers.