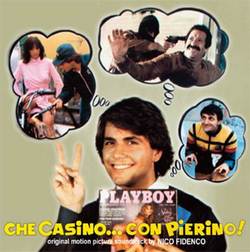 An open-handed slap in the face followed by another, this double-bill dedicated to the music composed for pseudo-trash movies celebrates the great proficiency of Nico Fidenco, indomitable and overflowing at a moment in his career in which his skill is perhaps at its most creative level.

Two improbable movies see the popular artist realizing two of the most ruffian scores ever, based on vocal themes with astonishing magnetic charge. The main title of this apocryphal Pierino is no less than surprising, and the same can be said for the main titles of the movie dedicated to the three supermen heroes: a disco funky vocal theme full of drum breaks, high-pitched choirs, verses and refrains that have the power of a 1978 performance at New York's Studio 54. The influence of the Maestro's works for television is evident here, since in that period he was often busy creating overwhelming main titles for TV programs that still nowadays ignite memories in all of those who can say, ''I was there!'' You can neither expect nor avoid it!

The CD is presented in a jewel case with a 12-page booklet, with liner notes by Fabio Babini, mastering by Claudio Fuiano and graphic layout by Alessio Iannuzzi. In the section dedicated to the score of 3 Supermen contro il padrino, there is an instrumental version of the main titles that has some echoes of the lyrics, but we decided to include for the sake of completeness. We're sure you'll appreciate that cue, even with the echo!