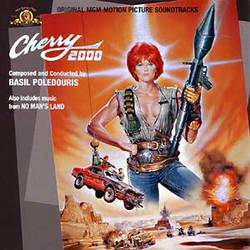 The 1980's were a prime period in Basil Poledouris' development as a film composer. He impressed many with his sonorous inaugural score for 1978's Big Wednesday and achieved an incredible milestone early on with Conan the Barbarian in 1982. It is amazing how his personal style and confidence as a composer seemed fully formed from the start, an unexpected surprise to say the least, and that his indelible mark on the arena of film scores seemed so effortless. This special expanded release of Cherry 2000 is another highlight from a very fertile period in Poledouris' career, coupled with the previously unreleased No Man's Land.

It was widely noted by Poledouris himself that when he approached scoring Cherry 2000, an odd, post-apocalyptic story of sex and love in a cynical society, that his chosen style would be an idiosyncratic melding of Mozart, Ennio Morricone and Giorgio Morodor. These may seem wildly divergent idioms which would mix as unsuccessfully as oil and water, but the music is incredibly cohesive, focused and still infused throughout with Poledouris's own rich melodic and harmonic charms. The influence of the playful aspects of Mozart's early work makes itself heard in "Lights On", with its bouncy, staccato woodwinds, classically styled piano and sawing strings. The spirit of Ennio Morricone's film scores for Italian-produced Westerns color such tracks as "Photograb" and "E Flips Sam". Meanwhile, the heavy presence of electronics in the score reference much of the groundbreaking work in the field composed by Giorgio Moroder, hear here in such tracks as "Lights Out", "Moving" and "Drive". The love theme experiences many permutations throughout, from warm strings and woodwinds in "Main Title", to synth and drum machines in "Juke's Jukebox" to its grandest statement in the action standout "End Of Lester", a wonderfully bravura finish. All combined, these elements make Cherry 2000 an incredibly hypnotic and vibrant score.

No Man's Land is far from the science fiction landscape of Cherry 2000, instead delving deep into the criminal activities of crooked cops. Also, the score is primarily electronic and thus lacks the warmth and humanity inherent in Poledouris's orchestral textures. It certainly fits the style of the mid to late-80's, the era of television shows as Miami Vice, where filmmakers preferred the cold tones and objective, ambient atmospheres provided alone by electronics. It seems they were afraid that any orchestral, melodic elements instantly invalidated the unflinching realism of their films, but this often prevents a viewer from developing any emotional attachment to the film's characters.

Poledouris has always done great things with incorporating synthesizers into his scores, less annoying harsh than Maurice Jarre's efforts and on par with much of Jerry Goldsmith's success in the style. His synth work here does have a great amount of rhythm and drive, such as in "Main Title", "Chase" and "Porshe Power/Drive My Car?", where live percussion and electronic guitar augment the instrumental array, and moody ambiance and suspense as in "Payoff" and "Showtime". The propulsive, determined main theme is reprised in the "End Credits", wrapping up an interesting effort from Basil Poledouris and a great release overall with these two scores combined on one disc.