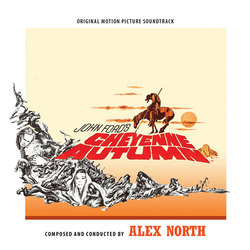 The epic scale and musical vocabulary of Alex North's score to the 1964 Warner Bros. film Cheyenne Autumn places it alongside Spartacus and Cleopatra as three lengthy and complicated works that form something of an unofficial trilogy, unique among all of the composer's other remarkable output. North chose to emphasize emotion over setting and dialogue, electing to write in an idiom that was far removed from what audiences of the time expected from a western.

North's score surges with dissonance; it is painted in unorthodox colors— omitting violins and violas, leaving only cellos and basses. The cellos often cover territory normally played by violas, resulting in aggressive, tense qualities in the higher range and dense, thick sounds in the lower register. The absence of upper strings heightens the effect and is a dramatic color North also employed in portions of Spartacus. The flute section alone included piccolo and C flute as well as alto flute and bass flute. Double reeds included multiple parts for oboe, English horn, bassoon and contrabassoon. Other expansions included a large brass section, sometimes utilizing no fewer than six French horns, four trumpets and four trombones plus tuba, with players both open and muted. The percussion requirements covered the full range of snare drums, tenor drums, bass drums, log drums of numerous sizes, a large timpani section, wooden, metallic xylophones and all manner of beaters and shakers.

To present all the music recorded under North's supervision, Intrada was given access to the entire Warner Bros. scoring session elements, newly transferred across some two dozen reels of film. Every reel survived in pristine condition, including all of the original score as well as the folk tune arrangements made specifically for the lengthy Dodge City sequence that originally brought Act I of the film to a conclusion. These elements also yielded "Overture" and "Entr'acte" cues as well as a brief fanfare recorded for the intermission card and a more deliberate one for use as a possible exit cue. The scoring sessions were captured on six-channel magnetic film with an additional six channels containing overlays of harp glissandi, xylophone hits, triangle and other colors that would be synchronized with the other six channels during postproduction mixing.