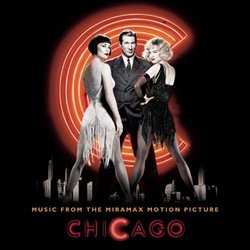 Well, it's official, isn't it?  All the critics and pundits and players are crowing that the movie musical is back in fashion.  First Moulin Rouge and now Chicago have brought the staid, silly musical into the 21st century with style and panache.  Hallelujah and amen, we're back to singing in the rain.

Or are we?  Is the musical in its current incarnation the same as that of old?  Not really, which is why these two new musicals have triumphed.  Moulin Rouge brought MTV editing and music to a mythic story that connected on an emotional level.  Chicago takes a different, and in many ways, more satisfying approach.  The characters no longer burst into song in real life, but instead in their imagination.  Roxie Hart, the protagonist, is a two-bit singer and dancer without much more than determination, but when she imagines herself singing we are treated to a song and dance extravaganza.  Moulin Rouge was important and heavy beneath its flash, but Chicago is nothing more than bawdy fun.

Director Rob Marshall has utilized his medium well and taken two performers who cannot sing and dance all that well, Renee Zellweger and Richard Gere, and through studio recording and film editing, made them believable as vaudeville stars.  In fact, one of the most satisfying aspects of this recording is that while certainly polished, the vocal sheen found in most movie musical recordings (remember Evita?) is not found here.  The grain of the voice, as it were, is allowed to surface, adding more depth and realism to the performances.  Not to say that you want to listen to Richard Gere on your CD player every day, in fact I would suggest skipping all his songs with your program button, but it does add something on screen.

Those who know the Broadway revival version of Chicago will realize that several numbers have been cut and a new one, "I Move On," added.  The style of every song is pure 1920s Chicago – hot jazz, cool blues, and show-stopping vaudeville, all delivered with gusto.  Zellweger comports herself nicely, singing sultrily when needed and breathlessly most of the time, and the less said of Gere's singing the better, although he does a fine job.  Of the three leads, the best by far is Catherine Zeta-Jones whose rendition of the opening "All That Jazz" sets a high standard for the rest of the album.  That standard is met by the supporting players.  John C. Reilly's "Mister Cellophane" is heartbreaking and one of the best songs on the disc.  The "Cell Block Tango," delivered by the female inmates, will stay in your head for days.  But all pale in comparison to Queen Latifah's "When You're Good to Mamma."  She obviously has the best pipes of the bunch and her performance is the true showstopper of the recording.

Included with the songs from the film are two short original score cues by Danny Elfman.  Elfman, best known for quirky and dark scores, has tread these waters before in his "Oogie Boogie's Song" from The Nightmare Before Christmas, and his score to Dick Tracy.  Here he presents "After Midnight," a slow New Orleans Dixieland jazz number, and "Roxie's Suite," a fun upbeat piece that complements the songs from the musical.  A fun diversion for the composer and the listeners, they act more as filler than substantial composition.  Also included are two obligatory pop numbers.  The first is a remix of "Cell Block Tango" by Queen Latifah and Lil' Kim featuring Macy Gray.  Although certainly made for commercial reasons, this remix succeeds wonderfully in bringing the situations presented in the tango into the present.  It is a welcome addition.  The second song, Anastacia's "Love is a Crime," is nothing more than end credit music that doesn't show up in the end credits.

Is the musical back to stay?  If Hollywood keeps producing smart, well-crafted musicals like Chicago then there is a good chance the answer will be yes.  Is the cast recording back with it?  While not consistent, this recording has a few wonderful heights to which I will return and serves as a fine souvenir of the movie.  Besides, by purchasing it, you're certainly being good to Mama, and we all know what that means.