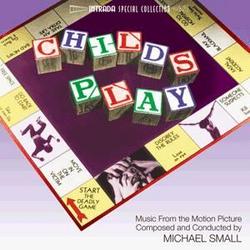 For Child's Play, Michael Small's main theme is a Latin song for treble chorus with keyboard and harp accompaniment, well suited to a traditional parochial school. But this fleeting impression of holiness merely serves as a pivot into the score's darker half, consisting of music that might have drifted up from the very pit of Hell. For the majority of the film, the violent and blasphemous doings of the boys take place either off screen or obscured by shadow. Music is allowed to be the primary signifier of dark forces at work, and to this end Small holds nothing back.

The phrase "impending evil" could easily have been used twelve years later to describe Firstborn (1984). Small initially plays things straight, with sensitive keyboard-led writing that highlights piano and synthesizer. His blend of orchestral and electronic elements is extremely characteristic of the period and is arguably more responsible for the vibe of the picture than the source music. The music flows smoothly between major and minor, with a touch of subtle anxiety in the way Small returns to and develops repeating half-step gestures. Once Sam enters the picture—and particularly after Jake discovers the hiding place where the drugs are kept—an undercurrent of dissonance and sonic strangeness creeps into the score.

For this premiere release of both scores, Intrada presents Child's Play from 1/4" tapes in Michael Small's collection. Most tracks come from a stereo album mock-up the composer made. All other tracks are from monaural rolls of album outtakes. Firstborn is presented from two-track 1/4" stereo mixes made at the time of the film and—for selected cues not mixed to stereo in 1984—new mixes from the 24-track 2" multitrack masters.