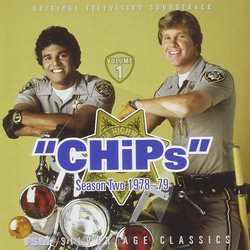 Nostalgia has a way of making crappy television seem divine. You forget the flaws and warmly remember the fun of simplistic action shows which seemed to exist only to perform innumerable car chases through the South Californian highway system (and from the looks of it, primarily the 118 and the 210). And if you think that\'s a segue into making disparaging remarks about "CHiPS", how dare you! To trash the most holy of holies? That is sacrilege! Erik Estrada was - and always will be - awesome.

When you look at the packaging, there may be a little confusion with the numbering, so let me clarify: The original season of the show was scored by a variety of composers with a theme by TV veteran John Parker (M*A*S*H*, Barnaby Jones). It was the second season (which this album covers) when a fresh young composer named Alan Silvestri was brought in to write a majority of the season\'s music. Silvestri would continue to be the primary show composer for the next four seasons (through 1983). The show gave Silvestri the foundation and experience he needed until he broke out a year later with Romancing the Stone, establishing his career long collaboration with Robert Zemeckis.  In a nice bit of trivia, another fledging composer by the name of Bruce Broughton scored an episode this season (track 7, "Trick or Treat").

The album is a "young" score. CHiPS was Silvestri\'s first real break and he\'s trying out a lot of stuff. There is not much of Silvestri\'s signature sound. "Return of the Turks" shows hints of the masterful suspense cues he would do in future projects, and occasionally his string arrangements deliver a few signature Silvestri "licks". He is clearly delivering an upbeat "hip" (for the time) disco sound. While this style of music quickly became "kitsch" in many people\'s eyes, it doesn\'t make the album any less fun. The very catchy theme pops up in fragments a few tracks ("High Flyer", "Repo Man" and a few others). Other than that, the individual tracks are suites of various episodes with awesome titles like "The Shiek" and "Supercycle." There isn\'t a lot of variation in the style of music. A small brass section, "wakka-wakka" guitar chords, strings, high-energy percussion and synthesizer accompaniment carry the typical Disco instrumental melody. And you can\'t forget the occasional cowbell.

That\'s the meat of what is here. If that is up your alley, this is one sweet album, which is packed with music. The novelty factor alone makes this an interesting release and Film Score Monthly put out this album under their usually fantastic Silver Age Classics label. Just looking at the packaging and liner notes, you can tell they get the appeal of the show and treat it with the dignity and class it deserves. And going through this album a few times has rekindled a desire in me to re-watch the show.