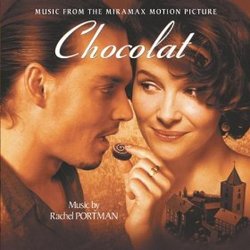 Lasse Hallstrom's Chocolat is a simple film with a fairly simple theme, told with a healthy dose of magical realism and choco-worship. The easiest and most personal story for most artists to tell is the one of being a free spirit trapped in a conservative or misunderstanding place, and Hollywood has churned out many such a tale. What is refreshing this time around is that the film tries to take the story to another level without becoming too self-serious.

The film starts when a mysterious woman and her daughter appear in a conservative town in 1950's France. The woman, Vianne (Juliette Binoche), sets up a chocolaterie, much to the chagrin of the wickedly uptight mayor, played wonderfully by Alfred Molina. We soon learn that this woman, who came in mysteriously with the North Wind, adds a certain magic to her chocolate, bringing out the true desires in this repressed town. What makes the story interesting is that it is not just a question of whether she will change the town, but will the town change Vianne and her wandering ways. We like and care about Vianne and her daughter, but they too have demons that must be exorcised, just like the town.

Composer Rachel Portman could have imposed an overall thematic cover to the film, but instead chose to color each scene individually. The film deals with some very serious and dangerous moments, but mostly in a light-hearted way, and Portman successfully balances the sense of joy, melancholy and intrigue. There is a lot of cross-culturalism, brought on in part by Vianne's Mayan heritage, and Portman flavors each scene well.

However, because the music is so specific to the scenes, and lacks a sense of true unity, the pieces fall short of collectively creating an overall powerful soundtrack. When I listened to the score again, I recognized the music, but I had no strong associations with certain moments in the scene. My fellow viewer's cell phone going off in a particular scene made more of mark than any specific piece of music.

I am reluctant to diminish this score too much, because the individual pieces are still well crafted and solid. While the score does add texture and emotion to each scene, it simply does not bring the film to any higher level as a whole. If you might like an eclectic blend of orchestral film scores and hybridized Andean music, then you should check out the score to Chocolat. Otherwise, enjoying it for what it is during the film should be enough.