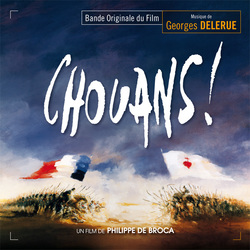 Composed six years after the Cinéscénie du Puy du fou and two years before The French Revolution, Chouans! is a rich score that amplifies the dramatic impact of Philippe de Broca's film. The epic score expresses the whole scope of the quintessence of Georges Delerue's lush and evocative style: a heartbreaking love theme characteristic of the composer's neo-baroque writing style, a folk theme inspired by traditional Breton music for the Chouans, flavorful period dances, lavish baroque pieces, marching tunes and several powerful pieces for strings bringing to the film a dramatic dimension and creating an atmosphere of inevitable tragedy.

To celebrate the 30th anniversary of the film in 2018, Music Box Records is very delighted to present the expanded release of one of the most prestigious scores composed and conducted by Georges Delerue. This present edition has been fully remastered from the original master tapes and features 26 minutes of previously unreleased music. The package includes a 12-page booklet with liner notes by Sylvain Pfeffer, discussing the film and the score.