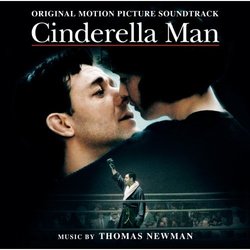 After listening to Thomas Newman\'s latest score several times, I\'ve decided one thing for certain – Newman is going for an Oscar. I\'m sure that may strike you as a very forceful statement, but read my arguments below and see if you don\'t agree with me.

As a movie, Cinderella Man is a classic example counter programming. Over the past twenty years, summer has become a time of mindless spectacle at the movies. Every weekend finds a new movie that promises to blow stuff up better than the movie released the previous weekend. But occasionally, studios release a movie with Oscar buzz during the summer just to see if it has legs and could make a little extra money by appealing to a different sort of moviegoer. Think about the release of Seabiscuit a few years ago and you\'ll understand what I\'m talking about in more ways than one. Like that wonderful horse-racing movie, Cinderella Man takes place during the Depression, concerns a down-on-his-luck man who finds redemption through sport while bringing hope to a nation desperately in need of it, and was scored by a Newman. A strong case of deja vu really permeates this movie.

Cinderella Man was directed by Ron Howard, a director who often turns to James Horner for his scores. But in this case, Thomas Newman got the job, quite possibly because he has been scoring this type of gritty, historical picture to great acclaim for several years now. Unfortunately, Howard seems to have asked for a Horner-like score because many of the characteristics that make me look forward to each new Newman score are largely absent from Cinderella Man.

Chief among those characteristics is Newman\'s idiosyncratic instrumentation, especially his use of slightly out-of-tune choirs of instruments. I\'m always fascinated by the unique sounds Newman brings to his scores, but those sounds really only appear in two cues. The jangly guitars, found so often as "traveling" music in other scores by Newman, appear here in "The Hope of the Irish," and, in a longer treatment of the same theme, in "Turtle." Once the guitars establish the grove, a penny whistle appears with the melody, followed quickly by a fiddle with the countermelody. Layers quickly build upon layers and by the end of both cues, there is so much going on that you have to allow yourself to be cared along by it. They are marvelous short cues and are the best of the score.

What have instead, and have in abundance, are Newman\'s minimalistic textures, piano melodies backed by gorgeous strings, and undercurrent of electronics that give depth to his music. This is a beautiful score, no doubt about it. To see an example of the beauty full in this score, look no further than the longest cue, " Cinderella Man." The cue opens with a beautiful, repetitious melody that is as expansive and hopeful as you might imagine and reminiscent of Newman\'s work on The Shawshank Redemption. The harmonic structure even moves up a whole step a minute into the cue to add excitement and optimism, a favorite trick of film scorers that Newman actually rarely uses. Halfway through the cue, the piano and flute enter with the other dominant texture found on the score. It is a texture found peppered throughout the score, and most notably in "All Prayed Out," a cue that is quite possibly the most beautiful of this score. The piano figuration (backed by strings usually) is heartbreaking and warm at the same time, and showcases Newman\'s considerable skill at evoking mood from the sparsest of elements.

Interspersed throughout the score are source recordings from the time period, mainly of the hot jazz popular at the time. While I often find these interruptions annoying, on this score they work quite well in establishing a time and place for the story and flow cleanly into and out of the newly composed cues.

So is Newman going for an Oscar? I think so, but even though his idiosyncracies are toned down, that doesn\'t mean he hasn\'t created a wonderful score for Cinderella Man. It is by turns beautiful and heartbreaking, exciting and meditative, and is definitely a delightful respite from the bombastic scores that typically accompany summer blockbusters.