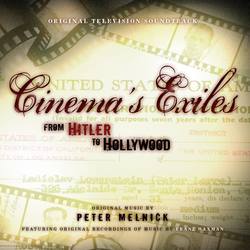 Cinema's Exiles: From Hitler to Hollywood

In addition to Peter Melnick's original score and adapted tributes, the album also includes vintage recordings of the era, in particular a previously unreleased work by Franz Waxman. The bonus section offers several Golden Age recordings used in the production of the film, including a six-minute suite from Fritz Lang's Liliom, the 1934 film that launched the composer's career in Hollywood. The album also features "Ach, wie ist das Leben schön" and "Für'n Groschen Liebe," two Waxman songs performed by Dolly Haas from the soundtrack of the 1932 picture Scampolo. Since these tracks are taken from vintage sources, their quality is archival.