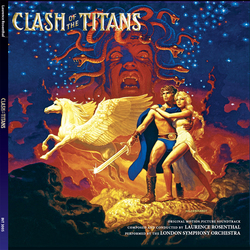 Clash of the Titans - Complete Score

Laurence Rosenthal's powerful and exciting score for the 1981 feature Clash of the Titans remains the pinnacle of his lengthy and distinguished career. Exhilarating, soaring, colorful... it's every bit as dynamic and effervescent as a fantasy score should be.

Originally released on LP by the Columbia Records label and subsequently on CD by PEG, and as a 2-CD expanded CD from Intrada a few years ago. Until the Intrada CD, the score had yet to be presented in its complete form, omitting, among other things, the darker, more aggressive side of the score. Amongst the treasure-trove of riches unearthed by Intrada for the earlier Intrada CD and this vinyl release: the entire "Medusa" sequence, the lengthy "The Quest" music, sparkling ideas for the weapons given to Perseus and several action cues written for fight scenes between Perseus and various Ray Harryhausen creations.