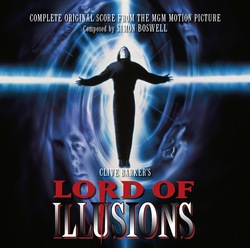 After our release of Jason and the Argonauts, we once again team up with Simon Boswell to bring out an expanded edition of Lord of Illusions, Clive Barker's third outing as a director, the 1995 noir horror film starring Scott Bakula and Famke Janssen. Clive Barker's 1995 cross-genre experiment mixes element of supernatural horrors with the style of film noir; this duality is also present in Simon's music.

The score's previous release only had about half an hour of score mixed with dialogue excerpts and songs. Officially licensed from MGM and produced in collaboration with the composer, this album features the complete score.

Our two CD release contains the complete underscore from the composer's own DAT tapes on the first disc. The second disc is a rare treat for film score fans: we present Simon's original demos for the film in addition to several bonus tracks that highlight different aspects of the film scoring trade. Liner notes by Gergely Hubai discuss the film and the score. The booklet is richly illustrated with never-before-scene sketches and production art, kindly provided by storyboard artist Martin Mercer and production designer Steve Hardie.

Disc one contains the complete music in film order, while on disc two you'll hear the demo versions Simon Boswell composed and recorded for the director to use as temp tracks during post-production while there was still no finished score to be used.

Since MGM didn't have any musical elements in their vault, we had to make use of the DATs the composer had in his possession that were run off from a tape, which was recorded during the recording sessions in Seattle. Inexplicably, half of these tracks are in mono, a fact Simon himself couldn't make sense of.